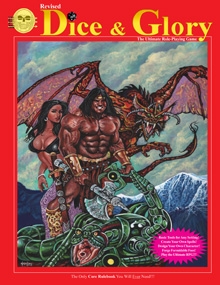 Someone else said that Dice & Glory was a combination of D20 gaming and the Palladium RPG system.  I think the more accurate description would be an unholy mashup of the two... I'm not so sure if I'd want to run this as is, but I certainly could steal stuff that would fit well in numerous OSR style games.

I mean think about it, any game that starts it's Insanity & Addiction section on the 14th page of a game that numbers over 200 pages must have something worth borrowing.

Feats look to be inspired by the OGL, and the skills are definitely Palladium in flavor.  Combat is definitely inspired by Palladium.  Looking at the combat section, I don't see S.D.C. or M.D.C..  Thank the gods for that ;)

It can cover most any type of setting, from fantasy to sic-fi.  I wonder if anyone has reskinned RIFTS with Dice & Glory?

The artwork will not win any prizes.  It's better then what I can produce, but it's serviceable at it's best.

It's definitely playable, and for someone looking for a crunch heavy mashup of OGL and Palladium influences (it is definitely more than just this, but the influence is heavy), this could be what you are looking for.  Me?  I'm going to mine it for stuff to use in my current campaign.

The Core Rulebook for the Dice & Glory tabletop role-playing system, a game system for those not afraid to be imaginative. This book provides all of the basic parts of the D&G system to craft your own unique worlds. This pen & paper dice based system uses reduced character classes, a stylized turn based combat system, a simplified skill system, skill-based psionics system and a unique and detailed skill-based magic/spell system. This allows Game Masters and Players near complete freedom to craft worlds and characters to their personal tastes and needs in any game setting imaginable.
The overall D&G system consists of:
The system also incorporates a detailed uncanny abilities system used for creature abilities or for use as powers in a super-hero campaign and a full chapter on constructing monsters and races for Game Masters. For those Game Masters and Players yearning for more creativity and flexibility the D&G system is what you are looking for!
Posted by Tenkar at 8:17 PM

Email ThisBlogThis!Share to TwitterShare to FacebookShare to Pinterest
Labels: dice and glory, Reviews