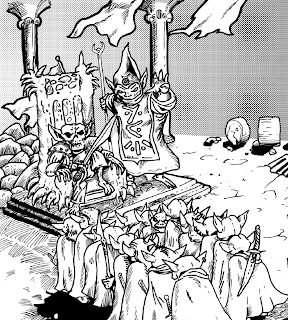 I was going to break this down as a blow by blow, but I am quite sure my players will do a much better job of that when they do their write ups on Obsidian Portal.  A nice, sweet 10% bonus to earned expo for session write-ups does wonders ;)

They managed to destroy the Decanter of Endless Ick that was feeding a well that was feeing the river that Brighton used for it's drinking water.  Of course, the plan wasn't to destroy the bottle, but such is life when you roll a 2 on a D20.  Against what, you ask?  Was it a proficiency roll, a stat roll, something else?  It was the improvised lets see how well you do this delicate job while dangling over a deep, cold well" roll.  Good thing they didn't roll a 1.

Next big encounter was the Linear Guild that other adventuring party that the players met during the first session, when Gorak decided to knock out their Dwarven Fighter.  This time, the party got the drop on the bad guys, right after the bad guys had desiccated a barracks full of goblins in their beds.  With the exception of one NPC that used a potion of Gaseous Form to slither away, the part won the well fought fight.  Did I mention the gratuitous use of flaming oil by the party's mage?  We actually had to look up the rules for thawing flaming oil at this point.  Hmmm - look at that - a natural roll of 1 means it blows up in your face.  Mr Mage, you have 4 HP - you might want to pick and chose your throws carefully, because a mistake will be fatal.  Not may - will.

Up next was the kennel that held 4 dire wolves.  They were still in their individual cages, and all were killed via missile weapons through the bars.  PETA might be filing charges against the party's elf on this one. ;)

It's a good thing that the party took out the wolves, as next up was the Goblin King (very much dead and brought back as a zombie by...) and his brother, a Goblin Shaman.  Oh, and 16 madly loyal goblin soldiers.

Damn but it was a good battle.  Two out of four PCs were knocked to zero HP or less.  A TPK was just around the corner, and then out heroes took out the Zombie Goblin King, and the moral broke for both the shaman and the few remaining goblins.  While the lizard man gladiator was able to shake of his wounds, the party's elf will never again be able to do a forced march.  I guess he better buy a horse soon.

This session I rolled all of my combat dice using the Tabletop Forge app in Google+ Hangouts.  The first 2 sessions I was regaining my "DM'ing Legs", so to speak, and I didn't want any nasty TPKs that weren't the result of just bad play.  Now that I feel my players and myself have a decent grasp of the ACKS rules, I've been letting the dice roll as they may - out in the open, on the table, so to speak.  ACKS has the potential to have many PCs fall to the DM's Dice.  Should be fun ;)