The Grumpy Dwarf Asks Mike Mearls a Question- What's Up With No Google+ Hangouts with D&D Next? 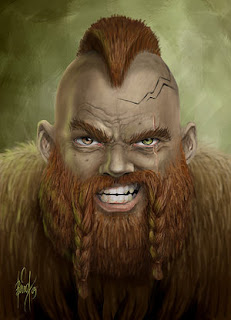 I'm really left scratching my beard on this one.  To me it seems like Hasbro's lawyers got involved in something they had no need to and are just muddying the waters.

When I signed my D&D Next playtest agreement yesterday, I do not recall a section indicating I couldn't play the game (it is a game, right?) using Google+ Hangouts, Skype or some other VTT.  Then WotC posts a D&D Next Playtest FAQ, and lo and behold, the FAQ says you can't:

Can I run an online game via email, Skype, Google Hangout or a play-by-post forum?

No, you may not run an online game on third parties sites at this time.

Which I guess means you can use WotC's not ready for prime time VTT, but even that isn't spelled out.  Strangely enough, I never agreed to this when I signed the agreement.


Do they think we are going to record a session and send it out into the world?  Why do that when the playtest documents were already on rapidshare by yesterday afternoon for all the world to grab without signing off on any agreement?

But wait, its gets better.  Here's a piece from Mike's interview at Kobold Quarterly (because you know he had to make the media rounds before the playtest released)


Emphasis above is all mine.

I'm left with just these thoughts:  Mike, what the fuck is going on?  Did your handlers let you know that Google+ Hangouts and the like were now verboten before you spoke so glowingly about it in an interview?  Why can we not do now what we could do before?  Are you trying to use this as a way to push WotC's VTT?

Talk about shooting yourselves in the foot.  This is one of the worst decisions the paper pushers could have made, especially after it was so largely used in the Friends & Family part of the Beta.  I know first hand, as my group use G+ Hangouts for our sessions.  Whatever faults we had with the system, it wasn't that it didn't work well over Hangouts.

As a side note, how the hell would you even know if members of your gaming group signed off on the agreement to Playtest D&D Next?  Just their word from what I can see.  There is no way to verify.