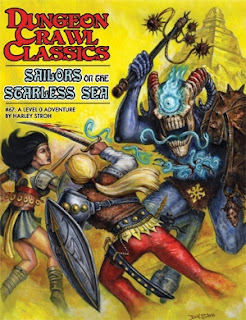 Remember how I've been talking about how the D&D Next Playtest materials drove me to the Dungeon Crawl Classics RPG?  Well, I picked up the two current releases that are up at RPGNow and printed them out.  For me, that is nearly unheard of.  I don't print out my PDF gaming material.  Well, with one exception, stuff I plan on using in game, directly.  When I was preparing for my ACKS campaign I killed a small sapling printing out setting materials and other stuff.  A few more branches suffered today.

Today I'm looking at DCC #67 - Sailors on the Starless Sea.  Lets see, where shall I start?

SotSS is a Level 0 adventure for DCC, which means it is written to act as a "Character Funnel".  20 peasants go in, hopeful a handful will survive.  So yes, it is an extremely lethal adventure.  It is a very atmospheric adventure.  Lastly, By The Gods, I expect it will be a blast to play and GM!

To survive, players will need their wits and lots of luck.  Without acting as a spoiler, the player characters will be up against the forces of chaos itself.  Should they survive, they will be adventurers, leveled characters, the elite.  Should they fail they "will suffer a fate more fearsome than death, their sprits fueling the infernal might of the reborn chaos lord."  So yes, they better succeed.  Well, at least some of them ;)

The artwork is awesome and there is actually a page of player handouts, which i always happen to love, as it really brings the players further into the game.  That and it's just great pieces of art.

Talking about art - the maps are beautiful.  Goodman should sell prints of them (with the room / laceration markings removed).  Really.  I'm not joking.  There is more to the included maps then just the maps themselves, and the embellishing artwork is amazing.  It's a shame players won't get to see them, just those of us running it.

Keeping with the DCC RPG default for adventures, there is pretty much no set up.  The villagers start at the adventure location and the only initial decision is which way they plan on entering.  I'd complain about this if it were another RPG system, but as this is DCC, it works fine and is actually expected.  Pretty much a "Cut the crap and lets start killing stuff!"  Very much the opposite of my sandbox styled ACKS campaign.  Both approaches have their validity.

Really should be a blast to run.  Looking forward to doing so via UA-LC in a few weeks.  I'll let you all know when I'm recruiting the needed number of peasants for the funnel ;)


Since time immemorial you and your people have toiled in the shadow of the cyclopean ruins. Of mysterious origins and the source of many a superstition, they have always been considered a secret best left unknown by the folk of your hamlet.
But now something stirs beneath the crumbling blocks. Beastmen howl in the night and your fellow villagers are snatched from their beds. With no heroes to defend you, who will rise to stand against the encircling darkness? The secrets of Chaos are yours to unearth, but at what cost to sanity or soul?
An introductory adventure for the Dungeon Crawl Classics Roleplaying Game, Sailors on the Starless Sea pits a mob of 0-level adventurers against the legacy of the Chaos Lords and their corrupted hordes. Delving beneath the crumbling ruins, the characters discover ancient crypts, a starless sea, and an ancient ziggurat, where death and treasure await in equal measure!
Posted by Tenkar at 6:55 PM