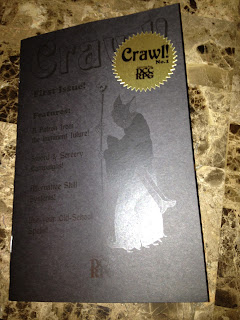 I think you can tell I'm a fan of RPG fanzines.  I'll take them in print and I'll take them in PDF.  I almost always grab the first issue of a new one for fear of missing out on something really good.  Besides, one issue is often enough to weed out the good from the not so good.

Crawl! is most certainly in the good column.

I'm pretty sure the cover shot of Crawl! #1 is not going to do it justice as it's black ink on black paper.  Trust me when I say the effect is much better in real life compared to my piss poor photo.

How about the inside?  Twenty pages of Dungeon Crawl Classics goodness.  See, I'm still working my way throughout the tome that is DCC and this little booklet helped kickstart me to decide to complete the journey (well, that and the DnD Next Playtest Materials being released today reminding me how much the smaller publishers are pushing the envelope regarding Old School Style play, but I digress.

Some quick and dirty rules for turning your DCC game into a more Swords & Sorcery type of game.  Simple enough guidelines and very useful, even if I don't decide to use them immediately.  They are effective in showing how simple it is to house rule, and how a house rule doesn't have to be huge to have an fairly large effect on flavor.  Interesting use of Hit Dice Pools as one of the house rules.  If you've been following the D&D Next talk, it is pretty much what Mearls was talking about.  In this context, if the campaign lacks clerics and magical healing, it is almost a necessity.

The article on Patrons I couldn't quite grasp - need to get further along in the core rulebook it seems.

Variable skill check difficulties was interesting.  Think I need to read more on that section of the rules to determine if I'd want to use it.

Converting OSR style spells to DCC was pretty interesting.  Two pages covered a lot of ground. If I ever kick off a full campaign of DCC I'd probably want to keep this handy if I wanted to throw the players some non-standard DCC spells.

How about the idea that I ordered this before I'd decided to actually give the DCC rules a complete read through?  I'm damn glad I have a habit of picking up the first issues of RPG fanzines in general.  Crawl! is yet another one I'll be subscribing to.
Posted by Tenkar at 10:23 PM