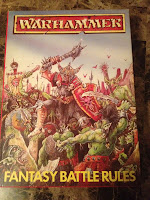 Somewhere , yet to be resdicovered, is a boxed set of the Warhammer 1st edition rules.  The ones that claimed to be an RPG but were barely functional as a war-game.  Still, I loved it.  Not for playing, just for the aura it gave off. 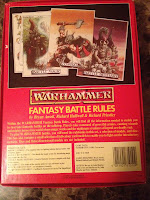 I remember buying the 2nd edition Warhammer rules, expecting it would have fixed the nearly nonexistent role play rules from the 1st edition.  The fixed it alright, by removing them completely.

I really wanted this to be the edition of Warhammer that worked for me.  It might have been a fine war-game, but my group didn't do war-games.

When Warhammer Fantasy Roleplay was released, I finally had the game I (and my group) were looking for.  We played the crap out of the WFRP until we burned ourselves out on the system, and returned to our old standby, AD&D.

Email ThisBlogThis!Share to TwitterShare to FacebookShare to Pinterest
Labels: games from the basement, Warhammer