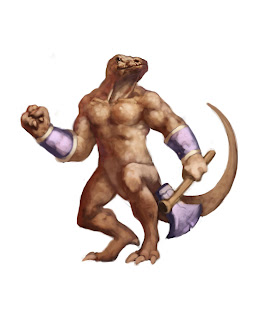 Wow.  Simply wow.  I have assembled an excellent group of players, which really shouldn't be a surprise, as I've played played with 3 of them for a while now, and the 4th I've known (via his blog at least) for years.  I'm very happy with how the first session turned out.

The party is currently composed of the following:

A Thrassian Gladiator who likes to brawl.  He actually got into a bar fight with a 3rd level Dwarven Vaultguard at the beginning of the session.  It was a close fight, but the gladiator won (and the dwarf now suffers from a permanent penalty to his initiative - do you think the party has a new nemesis with the dwarf and the rest of his party? ;)

An Elven Nightblade who is also the tracker in the party.  I'm allowing a high enough tracking roll to determine some details of the creature being tracked.

A Human Mage that certainly does not look the part.  A traveling companion of the gladiator from before the forming of the party, it is amazing he hasn't been an inadvertent casualty of said gladiator's desire to fight everything.  A sleep spell followed by a good set of manacles solves many a problem.

A Human Fighter.  The only party member native to the starting town.  Didn't get a chance to land a blow due to the well times sleep spell.  That will have to wait until next week.

I'm using Dark Times in Brighton for the starting town / sandbox and used the short adventure (with a few on the fly modifications) from The Manor #1.  Very little combat in the first session (the sleep spell took out the two troglodytes before any blows could be successfully struck), but the role play and the investigative aspects were definitely in full swing.  The damn party had me laughing hard at many points. I did learn a valuable lesson:  listen carefully to your players even while multitasking, or else you will miss the line "i'm searching the troglodyte's groin for valuables" as you will follow up with "you found a ring".  I don't think I've ever given out a "cockering" as a treasure before ;)

Rules-wise, I believe in empowering the players.  I allowed the successful use of the alchemy proficiency (it was a high roll) to identify the droppings as coming from a troglodyte.  Between the smells they were already dealing with, and a tracking roll that allowed the players the knowledge that the creature was humanoid, large, stooped with clawed feet, I figured they would all meet with the creature being identified.

Does alchemy or even tracking allow for such details as written in the rules?  No, but just because it isn't spelled out, doesn't mean it isn't part of the proficiency.

I'm also allowing appropriate stat bonuses to be used with proficiency rolls.  Doesn't unbalance anything in the grand scheme of things, and makes stats more important than just for combat.

In any case, I think we pulled off a successful start to a new campaign.  Not bad for a guy that hasn't DM'ed since 1997 ;)

(Troglodyte by Eric Quigley)
Posted by Tenkar at 10:23 AM