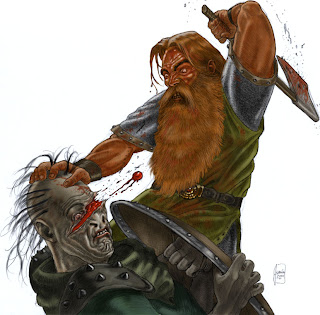 Goblins Care Only About Your Axe (original article here)

I’ve played a lot of D&D lately (as Bruce works at WotC, i expect he plays a lot of D&D all of the time). But even when using rules prone to design iteration (in other words, different D&D Next versions), one thing has remained constant throughout: When I swing my axe at a goblin neck, the goblin’s going down if I hit. (goblins used to have 1d6+1 hd - they should survive an axe swing just about half the time - unless they are 1HP minions like in 4e - now thats a thought)
That’s true whether the fight occurs in the theater of the mind (TotM), in TotM with the aid of scratch paper to show general position (my preferred method, also know as a Whiteboard when using a VTT), in a hybrid TotM-minis system, or with minis on a grid.

As was pointed out by my previous blog about the grid vs. imagination and the discussions it engendered, the system surrounding my goblin combat can dramatically change many other elements of the fight. The foremost difference is the amount of table time the fight takes to resolve overall, and the amount of tactical decision-making the environment provides my axe-wielding goblin killer. (more detail  = more time needed)
The tension between these two elements is real, and it can’t be swept under the rug. Narratively speaking, sometimes it’s simply too much effort to break out the minis and gridded terrain map to deal with two goblin guards at a cave mouth (maybe, but I suspect there are some 4e players that will call "foul!" if the DM refuses to do just that). The “story” of the situation isn’t really about tactics, unless the DM specifically changes the encounter to make it so (again, 4e is all about tactics - does this mean that 5e is going to put less of an emphasis on tactics?). Indeed, two guards at a doorway (and other “low power” encounters) are precisely the sort of encounters that grid-only combat tends to weed out of the game. (interesting observation.  i didn't realize 4e did away with smaller encounters.  damn shame.  i weep for my 4e brothers and sisters) Because the DM and adventure designer know it’s not worth the effort to break out minis for a simple interaction with two goblin guards (or even five goblin guards), the encounter either goes away entirely, or it faces pressure to become part of some other, larger encounter. (because more is always better?) This means that players, when they see minis on the table, always know it’s going to be some kind of fight, regardless of anything else. (you know, this is an extremely valid point, more so that anything else that has been said thus far.  miniatures being set on a battle-grid really do take away the suspense)

Other times, the story is about tactics. I do want to exactly know where the vampire lord is in relation to the acid pit, the windows through which afternoon sunlight slashes, the vampire’s dominated spell-casting thralls, and her various spawn slinking through an advancing line of rolling mist. Pushing or being pushed 5 feet (does anyone realize how far 5' is in real life?  that's one heck of a push)  can make the difference between winning and losing this fight, depending on whether I’ve been pushed into the acid, or if I can push the vampire into the sunlight.  (here's the big bull shit fallacy about battle grids.  if this was a real life fight to the finish, all you would see is your immediate surroundings - you wouldn't have the time to figure out complicated moves to push the vamp into a sliver of sunlight.  You don't see a whole 60'x40' room, 360 degrees around you and make your choices.  in TotM, you could tell the DM what you want to accomplish, he tells you what you need to roll to accomplishsuch (if it can be accomplished)and it's done.  Yep, it's that evil DM Fiat.  But hey, whatever floats your stone boat down the Halls of the Latest D&D)

Based on the poll we conducted on my last grid-focused blog (holy fucking shit!  hey, is there anything they won't do a poll on at WotC?  how about a poll on picking corn kernels from shit?  wait, that might have been done already), a majority of you agrees that different encounters have different needs when it comes to encounter rules. That’s cool, because we feel the same way. (i bet everyone feels like their concerns are validated now) Assuming we move forward with this line of thinking, we’ll end up with a core conflict resolution system that can encompass both TotM and the grid. Imagine a combat system not too different from previous editions that relied almost solely on the use of the grid, but tweaked so that it works seamlessly (this word carries a hell of a lot of weight) for those fights where minis are not used or expected.

This means, to answer one line of questions raised in the grid discussions, that switching between TotM and the grid must be easy and seamless, both for groups that prefer to switch between modes, and for groups who want to primarily stick to one or the other conflict resolution system. It’s not our job to pick a winner or loser in any sort of false “grid vs. TotM” contest, and thereby create a sub-group of D&D players who don’t have the rules support they deserve. Instead, it’s our job to create a straightforward environment where both styles of play prosper and can be used.  (good luck... remember, the grid plays havoc with the "one hour game session" goal.  see, that's part of the problem with D&D Doppleganger - each added goal conflicts with a previously stated goal)

For instance, if a fighter uses an ability that seems to make sense on the grid, we should design that same ability to also be useful in the TotM. (notice Bruce doesn't say "have the same effect, or just as effective", just that it be useful)  In a fight that takes place next to a curtain of green slime (can you actually HAVE a curtain of green slime?  i'm very curious.  how about a table cloth of green slime, or maybe even coasters?), even in TotM, it’s not as important how far I can push a foe with an ability as it is important that I can push a foe at all (kinda goes with my "do you have any idea how far a 5' push is in real life?"). If my “hack and shove maneuver” results in the goblin stumbling backward, then, regardless of distance in feet or whether this happens on the grid or in the players’ imaginations, the goblin has just discovered that green slime is not its friend. (i thought the whole point of this article was about axes? ;)
Posted by Tenkar at 8:50 PM