Delving Into Ancient Odysseys For an Abstract Battle Map 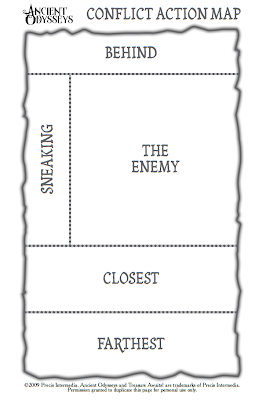 I'm beginning to wonder if an abstract "Battle Map" works best for a D&D type game.  To the left is the Conflict Action Map from the Ancient Odysseys RPG.

AO is a fairly simple game, which can be played with a GM, w/o a GM or even solo, although I expect it would shine fairly well with a GM, especially as a pick up game or a con game (or even a pick up game via G+ Hangout).  It isn't deep enough for me to want to run it as a long term campaign, but it's got more than enough meat for a couple of game sessions.

What I really like about Ancient Odysseys is the Combat Action Map.  It breaks things down into "zones".

Closest are the front line, they engage the enemy in melee.

Farthest are those using missile weapons, spells or having a desire to be in the back and avoid things.

Sneaking is for "sneaking".  This is for the characters looking to put themselves behind their adversaries.  You move from Sneaking to Behind.

Behind is for characters positioned for backstabbing or whatever your system calls it.

This should work both in a face to face game session and a virtual (online) game session.  It gives characters an idea where they are in relation to their enemies.  It would still really more on Theatre of the Mind than a true battle map, but I don't see anything wrong with that.

I may try this out on my ACKS group in the coming weeks.