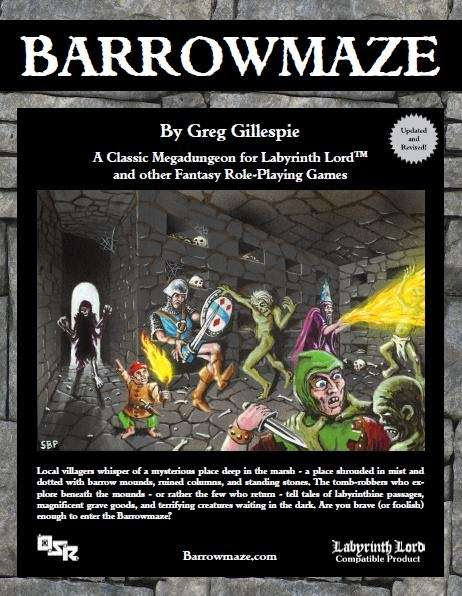 Greg Gillespie, writer and designer of the MegaDungeon called Barrowmaze, was kind enough to offer me a copy of said uber-dungeon to review.  How the hell could I say no, especially after having see the amazingly Old School cover by Poag.  The cover, as I've discovered by reading the adventure, fits it perfectly.

Let me start by saying this is definitely written with an Old School experience in mind.  It is most certainly lethal in it potential, as it's author has no problem letting the prospective DM know.  Strangely enough, I had never heard the acronym OSR stand for "Oh Shit! Run!" before reading Barrowmaze, but it certainly fits.  A successful party in an OSR styled game needs to know when to pull back, resupply, heal wounds and re-memorize spells.  Old School is not as forgiving as that new fangled stuff.

Another sign of it's strong rooting in Old School Play, is the strong (since the module underlines it, so will I) suggestion that PCs hire hireling and henchmen right from the start.  Because when death comes a callin', you may need some cannon fodder to buy you some useful time ;)

Although set up as a dungeon crawl for new players (and the next couple levels that they gain), this isn't just a straight forward dungeon crawl.  They start with the immediate outdoor area of the Barrows and will have to avoid / kill / run away from random encounters.   When "sandbox style play" is referred to as Old School, folks forget that even within a set area, Old School often assumes a sort of smaller sandbox is  also in play.  Random encounters can often be random killers.

Of course, once the PCs enter the dungeon proper, they won't only be dealing with set encounters, multiple factions and random monsters -  there are also traps.  10' poles and iron spikes - don't leave home without them.

The PCs are more tomb raiders then heroic explorers, but that's okay.  Old School rewards you experience by the GP - don't forget that :)

Hmmm - I could run this using the ACKS rules without nearly any conversion.  PCs might be a tad stronger than LL characters, but that's easy enough to adapt to on the fly.

We get two new spells (one cleric, one magic-user) and 31 monsters in the monster section at the end (a handful seem to be from the old Fiend Folio).  Random tables (Random Dungeon Dressing is certainly going to be reused by me multiple times) are always useful.  There are even pre-gens for Men-at-Arms, Torch-Bearers and Porters and Henchmen, not to mention some PC pre-gens and a blank character sheet. Greg has pretty much covered all of the bases.

The maps are in classic TSR Blue, which always gets points for nostalgia.

You could run this straight from the PDF, but I'd recommend printing out the pages that deal with the rooms your party probably )or even improbably) will get to during the session in question and the maps.  Nothing sucks like having to find maps in a PDF.  There are no bookmarks or hyperlinks, but those are less needed and useful in an adventure that you will probably print out.  I'd never say no to them, but I'm not going to miss them much either.

Greg wrote Barrowmaze to be a megadungeon the DM could sit down with and be ready to GM within minutes.  No block text to be read to the PCs with every room, just a short description.  I could probably be comfortably ready to run this within an hour after starting to read it.  I won't know everything, but I'll be a step a head of the players.  Isn't that the secret to effective DM'ing anyway?

Local villagers whisper of a mysterious place deep in the marsh - a place shrouded in mist and dotted with barrow mounds, ruined columns, and standing stones. The tomb-robbers who explore beneath the mounds - or rather the few who return - tell tales of labyrinthine passages, magnificent grave goods, and terrifying creatures waiting in the dark. Are you brave (or foolish) enough to enter the Barrowmaze?
Barrowmaze is a classic old school megadungeon for use with Labyrinth LordTM and other fantasy role-playing games.
The Barrowmaze megadungeon setting includes:
1. An 84 page book describing Barrowmaze and The Barrow Mounds.
2. 300 encounter areas, traps, and puzzles to test the mettle of your players.
3. New magic items, spells, monsters, and classic blue maps.
4. Pregenerated characters and character sheets.
5. Over 25 new classic-style illustrations featuring artist Stefan Poag, as well as Toren Atkinson, Zhu Bajie, Trevor Hammond, John Larrey, and Jason Sholtis.
Barrowmaze will keep your players on their toes and your campaign going strong.
The .PDF can be yours for just $6.66 - that's right THE NUMBER OF THE BEAST!
Buy the print copy and the .PDF is just $2.00!
Barrowmaze is brought to you by the Old School Renaissance (so don’t forget your 10’ pole).
Posted by Tenkar at 4:47 PM