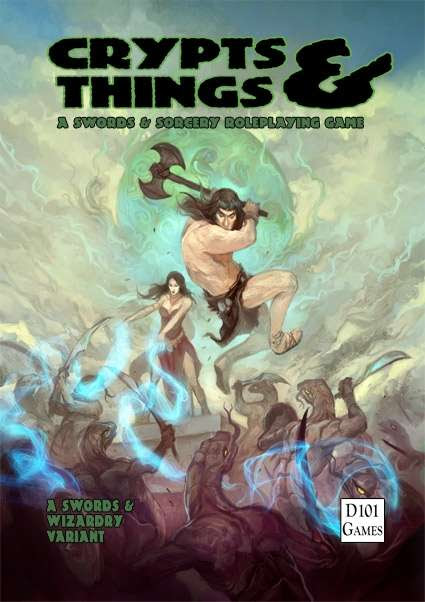 If you're looking for some deep, in depth review of Crypts & Things, this ain't is turning into it.  If you want some highlights and general thoughts, you're in the right place.  I may get to do a deeper review later, (edit:  this is already turning into a mult-parter - it may get deep) but my plate is fairly full at the moment (I know some are waiting on the next part of the ACKS review, for instance).

So, what do you get for your hard earned cash?  A pretty neat little system Swords & Sorcery styled system built upon the Swords & Wizardry game.  Default character generation is 3D6 in order, so yes, very Old School in nature (I'd opt for the 4d6, take highest 3 and arrange as you like, but I am a kind and benevolent DM).  There is one concession, and that's the recommendation to allow the players to start level 1 with maximum HP.

There are four classes.  Barbarians are decent warriors with a dangerous first attack ability.  They also have some other skills, such as tracking, stealth and danger sense.  Thieves get their classic assortment of skills.  Fighter have the best to hit roll in the game, and can choose from fighting styles such as Berserker and Weapon Master.  Magicians are the spell casters, who draw upon White, Grey and Black magic to accomplish their goals.  This means that their spell list is a combination of cleric and wizard spells in a usual OSR style game.

There is also a "Generate Life Events" random table that's part of character generation.  Events such as "I was chained to the Pillar of Judgment, and had to avoid the Pendulum of Evil" grants the character a bonus to AC of 2 pts.  There are 20 of these, and starting characters will roll 3.

Something else I forgot to mention.  When it comes to skill rolls, all characters can try, but a character with the skill has a +3 bonus.  So anyone can try to pick a lock, but it's the thief that will have the easiest time of it.

Hit Points represent "Superficial Damage" in Crypts & Things.  Damage is taken first to Hit Points, then to Constitution.  Damage to Con requires a save or the character falls unconscious.  Healing spells and potions do not heal HP, just Con.  Some booze may restore some HP, but a full nite's rest restores all HP. This applies only to the PCs.  Everything else dies at zero HP.

Crap, this might actually wind up being a multi-parter.  More later ;)

What is this game about?

It’s about exploring the ruins of the dying world of Zarth. Fighting off the Others,
alien monstrosities from outside of your reality. Making your mark on the world
before it dives into the sun Nemesis.  In short its a Swords and Sorcery role
playing game using the original edition of the world’s favorite role playing game.
Based upon the Swords and Wizardy rules.
Chapter list

Creating a character
How to play
Spell lists
The Book of Doom (A Crypt Keeper’s Guide)
The Continent of Terror  – Gazeeter of the setting.
Ill Gotten gains of Dark Desire – Treasure and magic items.
A compendium of Fiends – Monsters
The Hall of Nizun Thun – A mini-crypt (adventure)
Appendices a to M: Notes from the Abyss
Posted by Tenkar at 8:57 PM

Email ThisBlogThis!Share to TwitterShare to FacebookShare to Pinterest
Labels: crypts and things, review