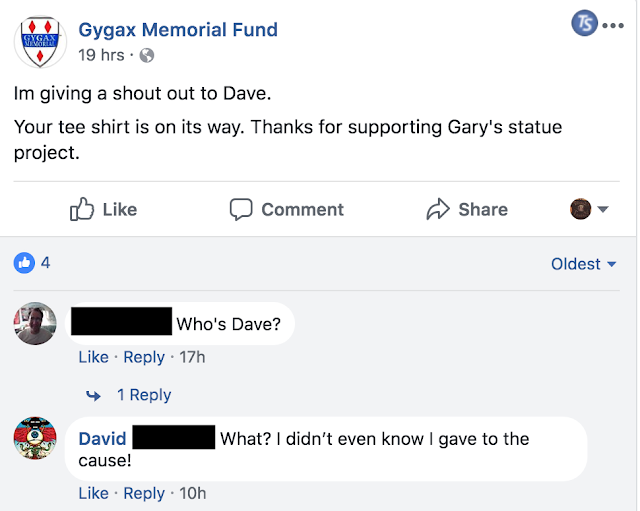 Yesterday I remarked that the Gygax Memorial Fund website was down for over a month and that the GMF Facebook page hadn't been updated in over two months.

Low and behold, what pops up on Facebook but the above (it also popped up on Twitter too).

Now, while it's nice to know that SOMEONE at the GMF reads The Tavern on a regular basis, the above screenshot leads to further questions beyond "Why the heck is the Gygax Memorial Fund website STILL offline?"

- Why tell Dave his shirt is coming via Facebook and Twitter? Wouldn't email be more efficient? He may follow neither Facebook nor Twitter. If such is the case, Dave still doesn't know his shirt is on the way. Ah yes, tell the world you still exist WITHOUT acknowledging either The Tavern's article or the fact that the Fund's website is down.

As far as I can tell, the only way to order a shirt is the GMF website, which has been down for over a month. Which means Dave has been waiting a fairly long time for his shirt.

If you are going to use Facebook and/or Twitter to update the status of the Gygax Memorial Fund, why not actually address the elephant in the room? What happened to the fund's website?