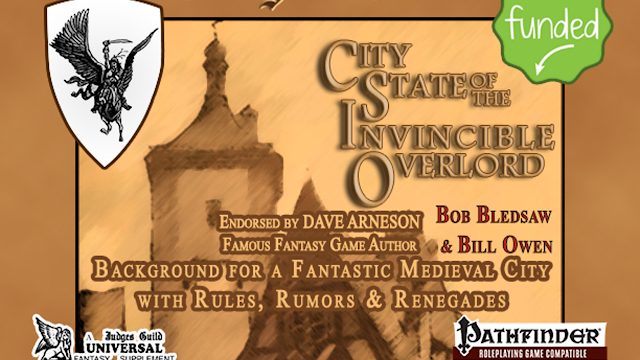 I'll give the long story short - Bob Bledsaw III has been removed from the City State of the Invincible Overlord Kickstarter. Bob II says he "appointed the wrong manager" and the capital was "mismanaged". I think those are both HUGE understatements. The money is, however, gone and then some, so outside funds will be needed to bring this to completion. Oh, and Bob II needs to change the Kickstarter password like NOW. - Tenkar

Below is the update:

Slow but Sure Progress - Change of the Guard (link to original)

There has been a major change made in management of this project.
Until today, it was in the hands of Bob III (my son) and now I finally can take the helm and ultimate responsibility of this important task. In fact, this is my first time logging into the account, and seeing the backers list - all who pledged and what amounts are due. Anyone wishing to reach me can use jgww@comcast.net or facebook.

I cannot ask for time, you all have given that, and your support.

I can only offer candor and truth. The books ARE still in progress. I have already begun sending out the miniatures to those who paid for them. I go into this with none of the capital you pledged, as it was mismanaged. I have had no access to the pledged funds ... and have sunk over 6k of my own funds into the layout and maps (I am not a rich man, or this would have been fixed long ago) ... things WILL get done as I can afford to do them. All JG profits from the Goodman Games/ Judges Guild kickstarter went to this kickstarter layout and map costs.

I ask that you back (publicly if not financially) any other projects JG may do by way of other publishers, as those funds will come here to help resolve this floundering venture as well. I do understand your anger and disgust with all this. I agree with that sentiment; you have all waited far too long, and so have I.

I did not make the decisions that got us to this point, but I failed you all in appointing the wrong manager. I have always strove to make JG look good, and you cannot imagine how sorry I feel at this point. I know that our biggest backers were our dearest fans; those who have bought our products for decades and literally put food on my family's table. My work is ahead of me here, and I will try to get past this to everyone's satisfaction.