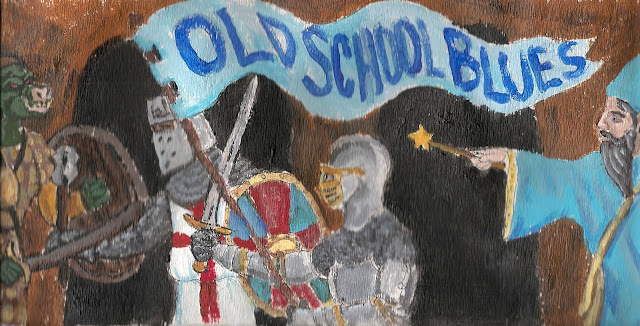 This afternoon Rach and I played in a session of Swords & Wizardry Continual Light run by +Denis McCarthy at the Manhattan Mini Con III. Its the first time I've actually played (not run) SWL / SWCL.

I had a blast. It was great to see Rach really getting into her character and grasping the rules. Ranger was a good choice for her. She likes to hit things - in game ;)

It was great to see faces I hadn't seen in a bit (Miguel & Noah), put a face to a person I've gotten to know online (Denis) and meet a new face (damn but we need name tags - doh)

We played in Denis' soon to be released for SWL / SWCL Beneath the Fallen Tower scenario. We barely scratched the surface in the session of play but Denis let us peek behind the screen afterwards. There is a whole lot of adventuring for a party in this package. I'm going to guess at least 2 to 3 sessions, but with the hooks and setting bits you could build a whole campaign around it. Denis should have a hit here.

I really don't want to give away any spoilers. It was a quest to find a missing son (not a child - though we found a child - but not child sized) with enough hooks and shiny parts we could have caused trouble for many levels. Heck, I even played a combat mage (15s in Strength and Dexterity)

Oh, and as I told Rach over dinner tonight. Its recharged my batteries. Woot!