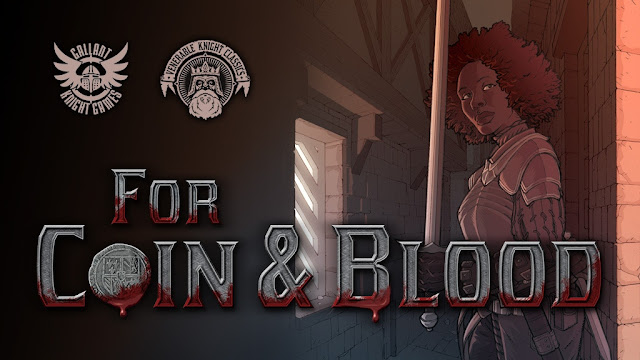 There's just about 12 hours left in the funding period of For Coin & Blood: Grimdark Old-School Fantasy Roleplaying. It bills itself as a "grimdark" OSR styled game. While I suspect the game itself will not be something I'd want to play or run as is, I'm sure for 5 bucks for the PDF I'll find enough to rip for Swords & Wizardry that I'll get my 5 bucks back in gameable value.


For Coin & Blood is an old-school inspired roleplaying fantasy roleplaying game, which takes the direction of playing the scum and villains in most fantasy campaigns!

Playing assassins, cult leaders, blackguards and more, For Coin & Blood is a different look at the otherside of the coin of fantasy roleplaying games. Inspired by the writings of authors such as Kate Elliot, Joe Abercrombie, Sarah Monette, Glen Cook, Anna Smith Spark, Scott Lynch, and more, For Coin & Blood is fantasy roleplaying about antiheroes, thieves and assassins, rooted in the darkest recess of mankind’s depredations.

While most roleplaying games hide their murderers under the mantle of “hero” (I mean, what “hero” invades underground complexes in search of treasure and murders the denizens because their whole species is “evil?”), For Coin & Blood makes no pretenses about what it asks you to be. You’re the villains that other campaigns fight. You’re the cult leaders, assassins, fallen nobles, murderers, mercenaries, necromancers and thugs.