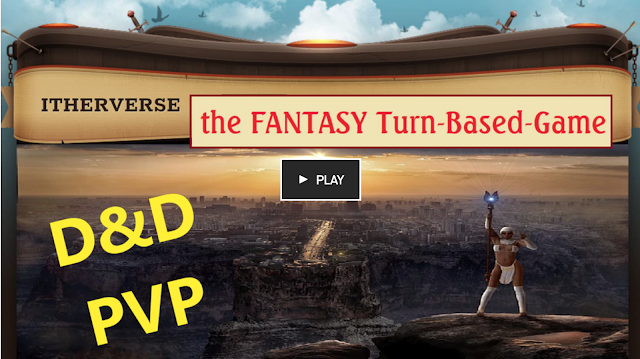 Alright, what could be wrong with the ITHERVERSE Fantasy Turn-Based Game / D&D 5e RPG Play-By-Post Kickstarter besides the horrid title? Let me count the ways...

1 - The Kickstarter page is a word for word transcription of the 7 minute video. Best part of the video? The first 4 seconds of audio.

2 - This is apparently going to be a subscription service. 15 bucks gets you into the "Closed" Beta, but after the Beta, you'll have to pay.

3 - How much with the service be? Doesn't say. But first level will be free, so never level up and you can play forever. If you wanted to.

4 - This quote irks me, as I don't think it refers to many - if any - table top RPGs: "Does your current game hold you back, limiting your creative use of the environment, such as swinging from chandeliers, parkoring out of danger and being heroic? Well, not here. Just like any other epic story-telling RPG, you are integral to making up your story and your character attempting anything you can think of. "

5 - Yeah. PVP. So, its really being targeted at MMORPGers. Therefore the subscription. Oh, and billing it as "the fantasy turn-based-game". Which is pretty much ALL TTRPGs.

6 - Can't you already do this for free? Aren't there forums dedicated to Play by Post? 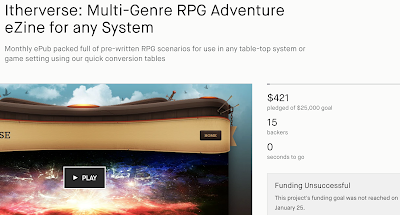 10 - "The risks are minimal" Damn skippy they are. I doubt this will fund either...

Some folks think the Kickstarter cash cow hasn't been beaten to death. It has. Sure, the new KS is only asking for 1k, but the fact remains that nothing new is being offered.
Posted by Tenkar at 10:19 AM