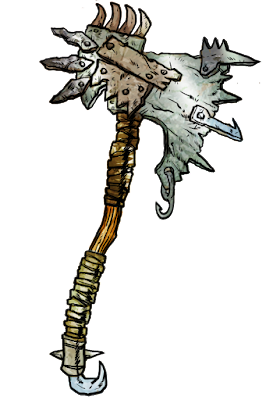 The Goblin Axe of Araz is a weapon created by the most devious mind of goblin-kind, Araz of the Firenose goblin tribe.

Araz wanted to supply his tribe with a weapon that would instill fear in their Dwarven enemies. As such, he designed a most fearsome axe, its head bolted with seemingly random hooks and barbs. In truth, this is where the danger lies.

While the goblin axe is unbalanced (resulting in a -1 adjustment to all to-hit rolls) its barbs inflict an additional point of damage per hit. Even more dangerous, if the attacker rolls a natural 20 on his / her to hit roll, an additional 1d6 of damage is done due to the hooks and barbs rending flesh.


Thanks to The Tavern's supporters at both The Tavern's Patreon and directly through Paypal, we have a monthly backing of over $150. This means 4 to 5 monsters for Swords & Wizardry Light / OSR per month, 4 to 5 Swords & Wizardry Light / OSR magic / wondrous items per month AND backers at $1.50 a month or higher via Patreon will get a collected PDF of the prior month's releases emailed to them. Paypal backers will need to email me in the middle of October to receive theirs. This is the second release for the month of October.
Posted by Tenkar at 7:30 PM