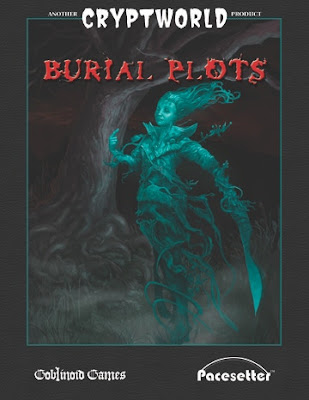 The thing I really liked about the original (Pacesetter) version of Chill was that is was, in a way, Call of Cthulhu with hope and some camp. Strict horror can be depressing to play longterm, but Chill did longterm campaigns well.

CryptWorld is the old Pacesetter game engine with a horror theme much like the original Chill. Think of it as a Chill retroclone.

Burial Plots, written by +Tim Snider , is a book of five adventures for CryptWorld. The adventures are written. The Kickstarter is to pay for the interior art. It has reached its funding goal AND an early, art free PDF is available to backers right now.

15 bucks gets you the PDF and an at cost Print version.