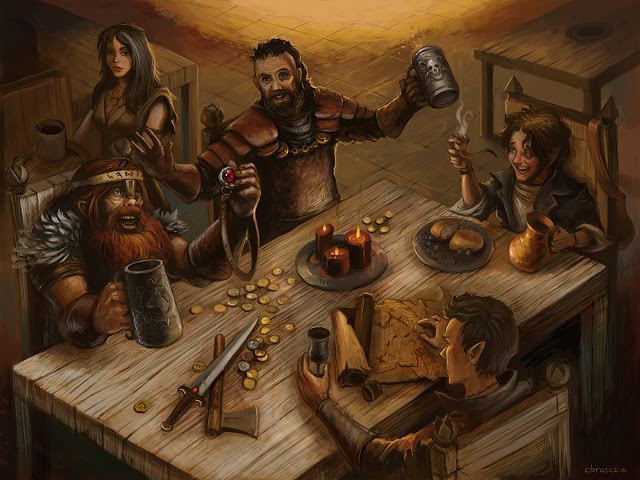 So, this kept me up late on Friday night. At the moment we are nearing 90 members of the Tenkar's Tavern Live Discord Server. That got me thinking. I've toyed with the idea of an Online OSR Convention for the last 2 years. I just never saw all of the pieces in place to allow such to happen without major planning and software and associated costs

Discord plus Roll20 or Fantasy Grounds 2 is a viable solution.

So, here are the questions, not just for the Tenkar's Tavern Community but the OSR at large:

- Would you play a game session in an Online OSR Convention?

- Would you run a game session in an Online OSR Convention?

- Would you attend a panel discussion in an Online OSR Convention?

The cost to attend would be ZERO. The Tavern would offer some random gifts to attendees with perhaps further gifts offered from publishers.

I'm toying with the idea of calling such a potential convention TenKon but as all things that is subject to change ;)

Spread the word on this post, because if there is enough interest we'll get the ball running.

Total side note - if you are a member of the Tenkar's Tavern Live Discord Server, drop into the swords - wizardry - light channel. The Swords & Wizardry Continual Light Beta Rules are linked there for your enjoyment. Not sure how long I'll leave them up there, so grab them soon. Work commences on laying out the SWCL rules via InDesign and with edits, corrections and clarifications this week and continues until completion.