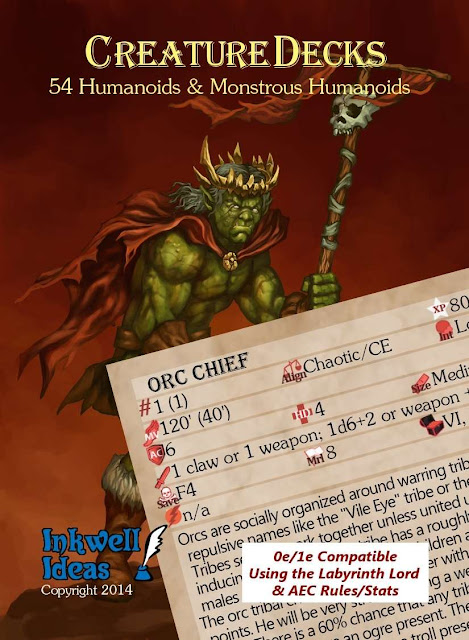 So, I was speaking with +Joe Wetzel over the weekend. Joe is the man behind Inkwell Designs. In addition to some amazing mapping software, Joe does card decks to support RPG Campaigns. Last week he put on sale his SideQuest Decks and the response was damn good.

Now, I have most of Joe's deck releases (which he offers for multiple systems) and they really are sweet. I use them for inspiration in session prep, but I'm sure one could use the various decks in play for seat of the pants inspiration.

Anyhow, I asked him if he had anything on sale that would be right up the alley of The Tavern's readers. He didn't, but then he did ;)

Creature Decks for 0e / 1e. The art is great and its damn convenient having all of a creatures stats, description and pic on a single card.

Remember, all purchases made via The Tavern's affiliate links goes to support The Tavern. There might appear to be a number of posts related to gaming products and their releases. The Tavern strives to make clear and unambiguous declarations of affiliate links and associations within the gaming industry. While it is difficult to be bias free, disclosing potential biases in the next best thing. Oh, and join The Tavern's Discord Server and head over to the swords - wizardry - light channel and download the Swords & Wizardry Continual Light Beta release, complete with typos and prior to edits and new layout ;)
Posted by Tenkar at 11:44 AM