Follow Up #3 - Kickstarter - Rifts® Board Game - In Carmen's Own Words

Today's update at the Rifts® Board Game Kickstarter features Carmen answering questions and addressing issues in his own words. In the interest of keeping something that resembles a balance on the coverage of this wild ride, I'm going to quote some parts of the update. Note, not all of the update, as it is long. You can read today's update in full here.

Also, I'm going to address parts of the update where I have relevant info to expand or refine what Carmen posted.

As a side note, the next post will certainly NOT be about the Rifts® Board Game Kickstarter - I promise gaming content! ;)

The gestation period of this Kickstarter was 5 years. Or, at least, the idea is 5 years old. And it doesn't seem to be solely Carmen's idea, as Kevin was involved in the "feasibility" discussion. Now, 2 years may be the time period that Carmen said "Let's get 'er done!" but its not the time frame of the idea.

Makes perfect sense. To not use a license you paid for would be foolish.

I agree. Harassing backers of the project is simply wrong.

The LLC being in Michigan while Carmen is in Canada raised some flags. I'm glad this was addressed and answered. 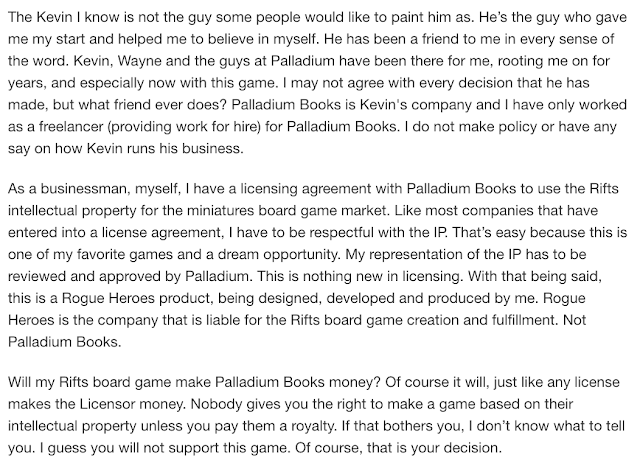 Nothing earth shattering. It attempts to put some distance between Carmen and Palladium. Can't say I blame him. 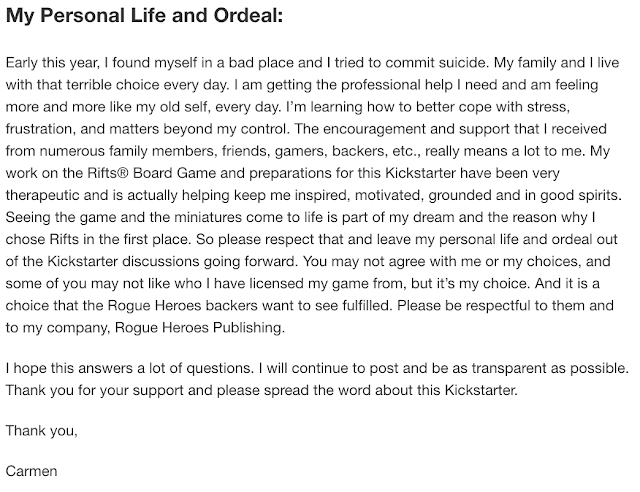 I know there are folks that are backing the Rifts Board Game KS specifically to support Carmen and that is great. He's getting professional help and that is good. He's also in for 2 plus years of stress, frustration, angry backers, frustrated backers and worse. I don't envy the position Carmen has put himself in.

Alright, back to fun stuff with the next post.
Posted by Tenkar at 7:41 PM