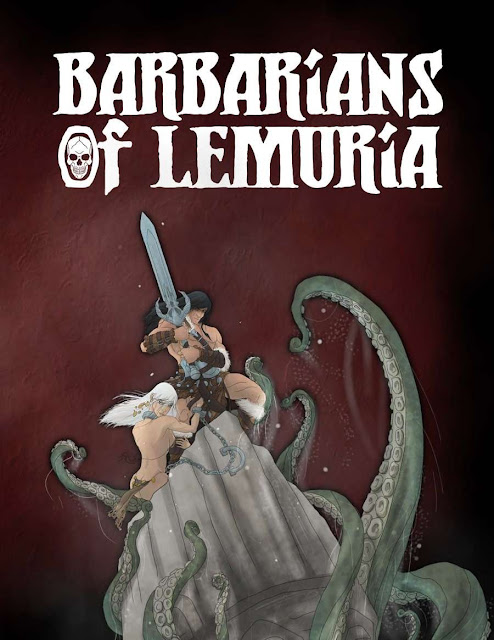 I own the original, non mystical, edition of Barbarians of Lemuria. Its one of those games I've always wanted to run but never have. Time is never on the gamer's side, it seems.

With the Barbarians of Lemuria: Mythic Edition being today's Deal of the Day at RPGNow, I may just snag the new edition and run this at tome point. More probably, I'll borrow and steal from it liberally for whatever OSR campaign I'm running.


The Second Age of Man is a savage time of sorcery and bloodshed, where strong men and beautiful women battle with warlords, priests, magicians and gladiators to carve a bloody path to the Throne of Lemuria...

Barbarians of Lemuria is a heroic role-playing game set firmly in the sword-and-sorcery genre. Lemuria is a post-apocalyptic world thousands of years in the future and unrecognisable to anyone from today. The continent has returned to an almost prehistoric state – a land of steaming jungles, vast untamed wildernesses, horror-filled swamplands, and sunbaked deserts. Massive man-eating beasts roam the unexplored regions of Lemuria and beyond, from island-sized sea serpents capable of sinking wargalleys, to the huge jungle-dwelling dinosaurs that can swallow a man whole.

Print on Demand versions of Barabarians of Lemuria: Mythic Edition are now available.

Included with the pdf purchase are:
- the main pdf in full colour
- the main pdf, print-friendly version
- a high resolution pdf map of Lemuria
- cover with artwork
- plain cover.

Remember, a portion of all RPGNow purchases made using The Tavern's affiliate links goes to support The Tavern. Tip your bartender! ;)
Posted by Tenkar at 11:19 AM

Email ThisBlogThis!Share to TwitterShare to FacebookShare to Pinterest
Labels: deal of the day, rpgnow sale, swords and sorcery