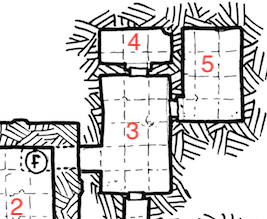 Part 1 and Part 2 as well as the ideas behind it all.

When the party drops from the storeroom (room #2) to the hallway below, they will find the hallway lit by a magical glowing torch. The torch can be removed from the sconce it is held by. As stated in the previous post, treat as a light spell that does not cease unless dispelled.

The short hallway leads to Room #3. It is 15" wide by 25" tall. The part enters from the west wall, south end. Each of the other walls has a door made of wood. There are crates along the west and east walls, labeled with various goods: potatoes, carrots, onions, flour and the like. the temperature is a steady 55 degrees F which helps keep the long term perishables fresh.

The door to Room #4 has claw marks in the wood and appears to be stuck. Repeated tries to push the door in will make it apparent that something or somethings have been piled against the door to prevent entry. This was done by the bartender's nephew when he saw the ghoul enter from the south door of room #3, causing the lad to flee to Room #4. If he is called out to, the young dwarf will remove the barrels of wine and vinegar and allow entry into the room. He will explain what happened and ask to be returned to his uncle.

The door to Room #5 has a single wooden board nailed across it with "Keep Out!" written in red paint. If the dwarf from Room #4 is present, he will explain that the storage room beyond was infested with giant rats and the door hasn't been opened in nearly a month. Anyone listening to the door hears vague squeaking. A thief that makes a successful hear noise roll will hear the squeaking of approximately six distinct creatures. If the party decides to open the door, it opens into Room 5 without effort. The wooden board is nailed into the door frame, not the door itself. Inside the room  5 very hungry Giant Rats charge to attack!

After the Giant Rats are defeated the PCs may want to search room 5. It is full of rat feces and has a horrible smell. Any goods stored here have been ruined. The rats have, however, found a sliver chain valued at 10 GP and buried it in their nest in the north east corner. Anyone prodding with a 10' pole (preferable) or their hands (less preferable) will find it. There is nothing else of value in this room.

Onward to the door in the South Wall...
Posted by Tenkar at 2:59 PM