I thought this was over and done but apparently commenters over at ENWorld are concerned that Sean Fannon is not disclosing that his use of affiliate links in his ENWorld posts. As for Sean, he's not changing a thing.

BTW, Sean's comment that is being responded to? Deleted. But I guess Sean can't delete the comments of others. 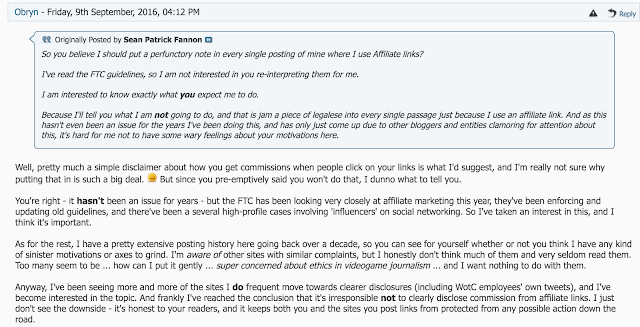 Wanna make a guess? Yep, Sean deleted his comment here too, which is captured in the response. A little snarky, perhaps? Am I the blogger clamoring for attention? No, just pointing out failures in the system. ENworld fixed their poorly marked "sponsored articles." Why not fix this?

Sean is being stubborn for NO legitimate reason. Add a simple "FYI - I make some cash back on sales made through my affiliate links. Thank You in advance."

I'm making an effort to be very open and disclose probably more than is necessary. Sean doesn't need to go that far.

ENworld gets about 8x the page views The Tavern gets on a daily basis (using websiteoutlook.com to get those estimates.) If I average on a yearly basis $1k from OBS referral sales, Sean must be doing significantly more. Why risk getting in trouble? Simply disclose that the links make one referral monies. 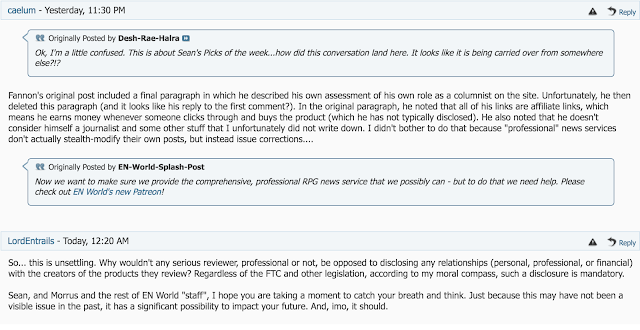 Yep. Gotta love that quote above: "He also noted that he doesn't consider himself a journalist and some other stuff that I unfortunately did not write down. I didn't bother to do that because "professional" news services don't actually stealth-modify their own posts, but instead issue corrections...."

If you go through all 6k+ posts here at The Tavern, you will see me, warts and all. I don't retcon and I don't stealth edit. I went to war with people I now consider friends and the "wars" are still there to be read by all. Own up to your mistakes and move forward. Digging a hole for yourself and then trying to cover it up by filling the hole back up is silly.

As an aside, if anyone ever wondered why I use so many screenshot and not simply a "copy / paste", this is why. Screenshots show what was, before the attempts to rewrite what happened. I can't misquote someone when I go with an actual screenshot of their words.

Disclosure: Sean Fannon was the Community Manager (or some similar title) at OBS when The Tavern was starting to get it's feet. His support was appreciated as he supplied The Tavern with occasional prizes to give away and seemed pleasant to interact with. I am predisposed to like Sean, but not his recent statements regarding news & advertising nor his undisclosed use of affiliate links. The FTC Guidelines were published recently, and while they may appear to be over cautious and to some heavy handed, it is what it is.

Edit - Here is what I believe was removed from the ENWorld posting:

Email ThisBlogThis!Share to TwitterShare to FacebookShare to Pinterest
Labels: EnWorld