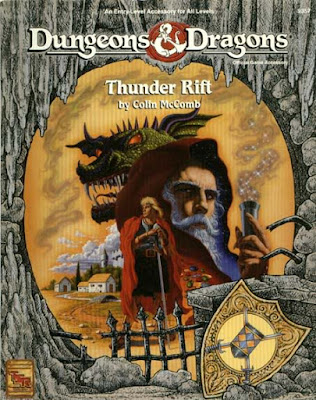 I just read +James Spahn 's post over at his blog Halfling's Luck that Thunder Rift was now available in PDF for $4.99 at RPGNow. I had forgotten how much I had enjoyed this little sandbox as a DM and made use of it right up until my hiatus from the hobby we love (damn you Police Academy Graduation and Wed / Thursday as my "weekends")

They fit a lot of gaming potential into those 32 pages. I'm not sure if my copy is in storage or buried in a box in the closet. I may need to pick up the PDF of Thunder Rift simply for nostalgia's sake.

I also read Appelcline's comments that there were some screw ups. I never caught them back in the day, but yeah, they are fairly large:


Whoops! (I): A River Runs Through It. The rivers of "Thunder Rift" rather infamously disobey the laws of gravity, going in all kinds of wacky directions. Fans have suggested underground outflows and magical interference as explanations for some of the Rift's water problems.

Whoops! (II): AD&Disms. The NPCs of "Thunder Rift" are written using AD&D classes, not D&D — meaning that they have both races and classes, rather than racial classes like "halfling" and "dwarf". McComb says that he thinks the editor incorrectly changed his Basic D&D classes to AD&D 2e classes. Whoever did it, this reflects a general problem at TSR in the early '90s, where most of the in-house designers, developers, and editors weren't that familiar with the Basic D&D game.

Email ThisBlogThis!Share to TwitterShare to FacebookShare to Pinterest
Labels: dungeons and dragons