What Ever Happened to the "All Woman Team" Edition of Swords & Wizardry Announced for the Summer of 2015? 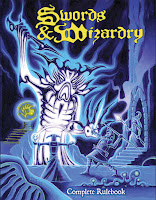 The only mention I can find online of the project is at +Christopher Helton 's Dorkland Blog from April 17, 2015:


So, this summer there will be a Kickstarter campaign to raise the money for a new printing/edition of Swords & Wizardry. What makes this newsworthy is that the fact that the graphic design, layout and art direction for this new edition will be an all-woman team of artists and designers lead by Stacy Dellorfano, the founder of the online gaming convention ConTessa. The art for the new edition will also feature new iconic characters that are female and people of color. In a way, the old school is stepping into the "new" school and with this edition of Swords & Wizardry we see Frog God Games bucking the perception that OSR/old school gamers are all conservative and reactionary individuals, interested only in continuing the status quo. Good on them for that.

So, here we are over a year later and I've heard nothing since. Anyone know who's on the team of artists and designers that Stacey assembled, because I don't recall Stacey writing an RPG (or rewritting an RPG) prior to this announcement. Last April the Kickstarter was only months away - it still hasn't been announced. Is this project still in the works?