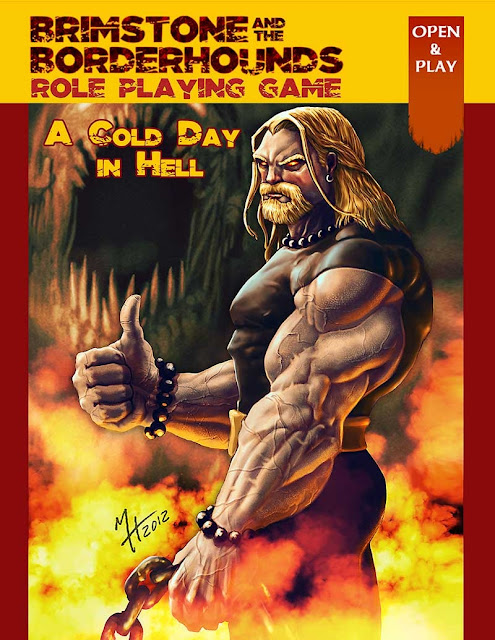 This one caught me by surprise. I've never read (nor previously heard of) the comic book series Brimstone & The Borderhounds. Apparently it's a new, licensed RPG coming from the Troll Lords too. As the Trolls don't release anything substantial without going the Kickstarter route, expect a new Kickstarter soon.

The Castles & Crusades: Brimstone & The Borderhounds RPG Quick Start is free. No rules for advancement, but they do suggest using Amazing Adventures to hold you over to release:

Hell is an unkind place. A sprawling megalopolis of twisted streets and ramshackle buildings piled one on top of the other, clawing their way to height’s unseen where the Lords of Hell rule. Here the harvested souls of evil labor as slaves, doomed to eternal torment. Bound to a world of suffering, always yearning for a world beyond their own. Those wicked, and who are able, seek to flee this city of the damned and do so with whatever tool they can: greed, violence, avarice. Fleeing Hell is the only goal.

But to do so, these souls must pass the Borderhounds. They are Bounty Hunters set on the edge of forever who hunt down wayward souls and throw them in, or out, of Hell. Led by grim faced Brimstone, these Borderhounds are the bane of the damned.

Now you can join the Borderhounds!!

Brimstone and the Borderhounds is a complete, standalone Role Playing Game using the tried and tested Siege Engine, crafted by veteran game designer Jason Vey. Fight devils, demons and more in your hunt to capture Hell’s wayward souls!
Posted by Tenkar at 6:31 PM