The Gygax Memorial Fund announced an Interactive Museum Project 2 1/2 Years Ago - Anyone Have Any News?

So, I was poking around Facebook for updates on the Gygax Memorial Fund and stumbled across this announcement from November of 2013 - GYGAX MEMORIAL FUND ANNOUNCES INTERACTIVE MUSEUM PROJECT WITH GAMES LEARNING SOCIETY'S MIKE BEALL AND TEAM. Interesting that there is no mention of this on the Fund's actual website, but with the way it's been updated, maybe that isn't a surprise.

Except for some reshares, I can find nothing else on this "project". For those asking "who is Dianne Carpenter Curtis?" - she is one of the three board members on the GMF and the Fund's "Coordinator of Educational Programs and Special Projects".

The Games Learning Society doesn't make mention of the project either.

So, anyone know something about this? I don't see any monies leaving the fund on relation to this project on the 2013 and 2014 tax returns and it doesn't seem to have been mentioned with any of the Fund's or Gail Gygax's most recent updates. It could be funded by Gygax Games, but I don't see Gygax Games or the Gygax Memorial Fund listed as partners at the Games Learning Society. 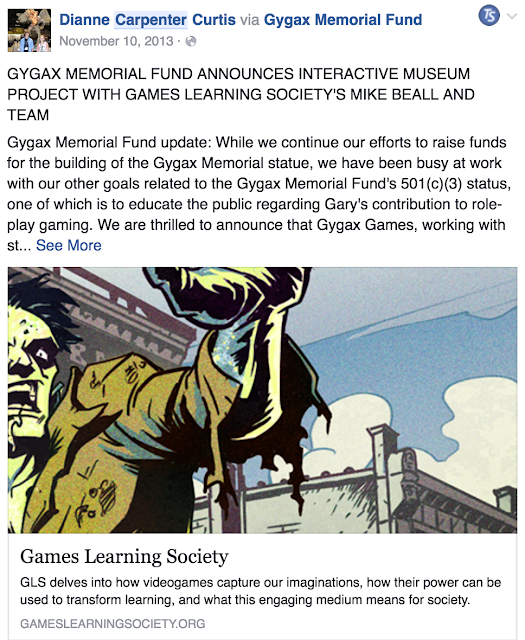 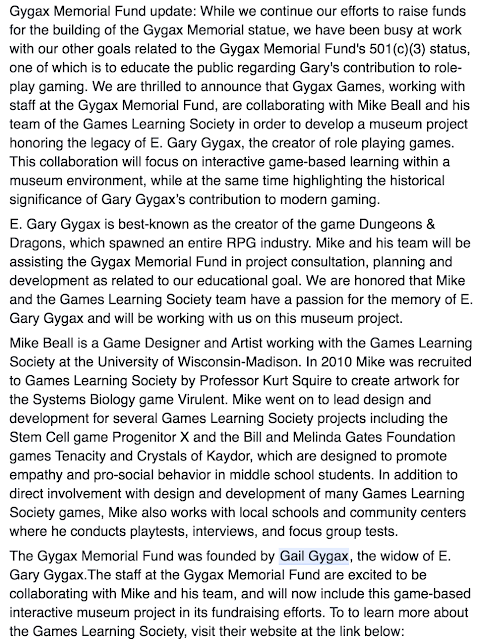