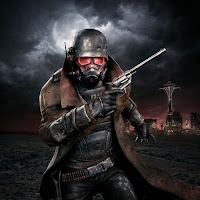 Hey gamers. It's +James Spahn here. Since StarSlinger is kinda my fault, I agreed to write the quick draw gunfighting rules for +Erik Tenkar. With his permission, I'm posting them here for your enjoyment. I wanted something that evoked the tension and feel of classic old west gunfights - something that built to a tense and climactic confrontation, but still kept it simple and quick. A gunfight in all the classic westerns was always something that was as much in the mind of the combatants as in their speed and accuracy.

Two men. One street. The blink of an eye and the crack of a pistol. A long silence. Justice is served. In StarSlinger there are two kinds of people: the quick and the dead.

The only way to determine who is quick and who is dead is a Quick Draw Duel. But there's a lot more to this than just two intergalactic hombres steppin' into the street and skinnin' their smoke wagons. A Quick Draw Duel has several steps and its as much a test of the gunslinger's gumption as it is his speed. All bonuses to Quick Draw Initiative are cumulative.

Step One: The Call Out

A Quick Draw Duel begins with a formal challenge from one gunfighter to another. This can be as blatant as one of approaching the other and quite literally saying “I'm callin' you out,” but it's usually a bit different in each instance. The more subtle instances are simply when both gunfighters look at each other and nod – they both know the challenge has been issued and it won't be settled until one man is dead. In other cases, it's a large public display where one man insults the other in front of a crowd.

Though player characters can call out NPCs whenever they wish, the referee is the final arbiter of whether or not a formal Call Out has been issued. Once a call out has been issued, both the challenger and the challenged must make a saving throw. They may add their Wisdom modifier to this saving throw roll. Other modifiers may apply based on the classes of the challenged and challenger as well as how well the scene is role-played. If the Quick Draw Duel isn't occurring immediately, this is typically when the time and place of the fight is named.

If the saving throw is successful, both the challenged and the challenger receive a +1d6 bonus to their Quick Draw Initiative. The Quick Draw Duel then moves into Step Two: The Crowd

Quick Draw Duels rarely take place privately. The occur out on the street, in the open – a public display of blood and speed. The townsfolk and witnesses to the both the Call Out and the Draw itself have a subtle impact on the Duel. If the townsfolk strongly support one gunfighter over the other, their subconscious hope in their champion's victory can actually grant him a benefit during the duel.

If the Quick Draw Duel isn't occurring immediately after the Call Out, both challenger and challenged can attempt to sway the witnesses to their side. This is done through roleplaying and thematic actions. A heroic gunfighter might try to convince the townsfolk that the time has come to end the rule of a villainous murderer, while a dastardly gunslinger might bribe or intimidate the town into supporting him.

Just before Step Three: Staredown begins each gunfighter makes a Charisma saving throw. Based on their actions they may receive anywhere from a -2 to a +2 modifier to this saving throw. If it is successful, then the gunfighter adds +1d6 to their Quick Draw Initiative.

The Quick Draw Duel is fought in the mind as much as with the hand. When the two gunfighters face off in the street, they often spend moments staring at one another. They size up their foe or trade hard words before blood is shed. Each gunfighter makes a saving throw, adding his level to the roll. If the saving throw is successful the gunfighter adds +2d6 to their Quick Draw Initiative.

Finally, the moment of truth comes and lead leaves leather. The moment of truth has come. Each gunfighter rolls their Initiative, applying both their Dexterity bonus and any Quick Draw Initiative dice they have earned. So a gunfighter who succeeded in the saving throws for all three steps would roll 5d6 (1d6 base, 1d6 call out, 1d6 townfolk, 2d6 staredown), plus their Dexterity modifier.

The winner has drawn and fired first. He then makes an attack roll against an AC of 9 [10]. His target is, after all standing still and unprotected. If the attack is successful the winning gunfighter rolls his weapon damage PLUS the total of the initiative roll and inflicts that much damage on his opponent – likely killing him.

If the referee wants to reinforce the climactic tension and deadly nature of the Quick Draw Duel, he can forgo the attack roll made during Step Four: Draw! and assume that the winner of initiative automatically hits with their attack.

If the winner of the Quick Draw Duel rolls an unmodified, natural 20 on their attack roll, the damage for both the weapon and the added damage dice from initiative are all doubled - almost guaranteeing a lethal attack.This House Rule cannot be combined with the Quick or Dead House Rule.

So, there you have it. It ain't all sunshine and gold panning in StarSlinger - so be quick, or be dead.