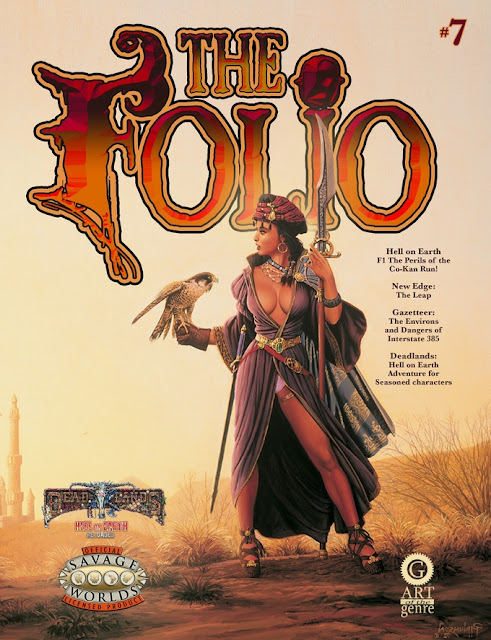 Savage Worlds is the game I'd love to love and I almost can grok the system at this point. My OSR wired head still gets confused with the spells and powers aspect of Savage Worlds. When I retire I'll need to get someone to give me a crash course in the system ;)

That all being said, I have some major love for the settings that have been released for it and Deadlands in no exception. I still have my copy of the the pre Savage Worlds Deadlands that was a stand along game. I also have the Savage Worlds setting for Deadlands and Deadlands: Hell on Earth and some of the other supplements. While I can't say I'm an expert on the Hell on Earth setting (or Deadlands Noir) I can say I can easily get lost for hours just reading the setting material. If any of it sneaks into my StarSlinger setting, I'm hoping it's inspiration only ;)

Imagine my surprise to find out that the same folks behind the Folio Series of OSR / 5E adventures have secured the license to release an official Savage Worlds Deadlands: Hell on Earth (Folio #7) adventure via Kickstarter.

I really enjoyed the first six releases in the Folio series, as they weren't only well written, but the art was top notch and the layout was professional. Looks like I'll be adding Folio #7 (Deadlands) to my collection.

Damn, I really need to bring that retirement date up so I can have all the time to read the things I want to and already own, let alone the stuff I'll be getting in the coming months.

Sadly I just have the original Folios in PDF, but there is a support level to get all 7 in print and PDF. Delivery estimate is March 2016. I retire at the end of March. The gods have spoken and I must obey...


Art of the Genre is proud to partner with Pinnacle Entertainment Group in bringing our fans Folio #7!  After completing the Roslof Keep Campaign it seemed a perfect point to sidestep to Savage Worlds for an adventure in the Deadlands: Hell on Earth setting.  It is an absolutely fantastic setting with an award-winning mechanic that I hope all our fans will give a shot.

With Folio #7, we will be blending the same OSR specs that our fans have grown accustomed to with the previous issues while also blending in some aspects of the Deadlands: Hell on Earth design.  I truly hope you'll have a much fun playing this adventure as my players did, and as always thanks for taking the time to check out our latest projects here on Kickstarter.

And as always, Instead of making gaming anvils, I’ve drilled the artistry of the game down, found the gems of a fast-paced adventure, and delivered it in such a way that both new and old gamers alike can enjoy and play without taxing their life schedules. In the end, isn’t gaming about being fun for everyone, not just the players? The Folio’s goal is to ensure that, and always give folks the very best quality ‘lean and mean’ adventures we can.