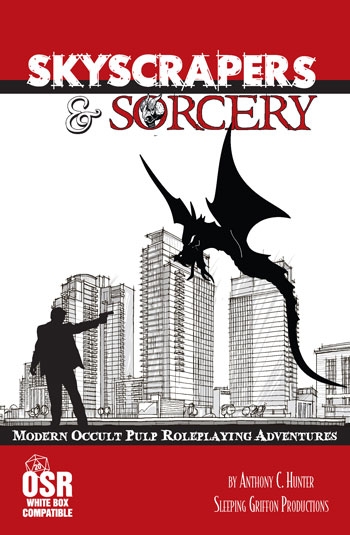 Swords & Wizardry White Box is all the rage these days. It's simply an excellent set of OSR rules one can easily (well, maybe "easily" is a matter of perspective) twist, turn, grind up and mash into something totally different and yet strangely comfortable and familiar.

What do I mean? White Box begat White Star and White Lies and now - Skyscrapers & Sorcery. Alright, they left out the "White" part in the title, but I'll forgive them that.

So, what is Skyscrapers & Sorcery?

It’s been several decades since the Event and you have decided that it is time to scratch the itch of Adventure. Welcome to Skyscrapers & Sorcery, may your adventures be many and fruitful and may your lives be valiant and your death be bravely faced.
An Old School, White Box compatible game system.

The character classes are familiar yet different from the White Box you know and love (but casters are still there.) I suspect from my quick skim, this might work work well as a heroic Cthulhu campaign ruleset. I'll know more when I finish reading. My problem with the various White Boxed derived rulesets is that I tend to assume I know all of the basic rules, and I'm occasionally tossed a curve. Something else to load onto my table for downtime reading at work.

BTW, I know of yet another White Box derived ruleset in the works. I have an early version on my tablet. It's a good year to be a White Box fan ;)
Posted by Tenkar at 8:55 PM