Feds Rule Against Doom That Came to Atlantic City Failed Kickstarter - Monetary Award, but no Money to Pay It 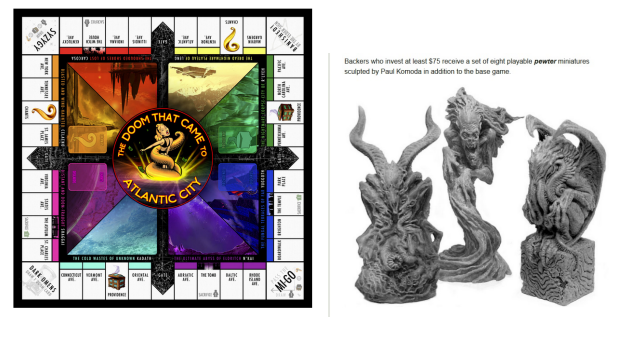 The Doom That Came to Atlantic City. Probably the best looking Kickstarter that I didn't back. Great art. Pewter minis. Enthusiastic project creator. A stroke job over a year long. Yes, this has it all.


On July 23, 2013, Chevalier canceled the project.  “After paying to form the company, for the miniature statues, moving back to Portland, getting software licenses and hiring artists to do things like rule book design and art conforming[,] the money was approaching a point of no return," he explained. The post continued:

Suffice to say that I never gave up and always intended to get this project printed. My intentions have always been good and I've struggled with this greatly. I've spent a large amount of time pitching investors, begging banks for loans and seeking other sources of funding to fix this. Sadly I found no takers."

FTC lawyers claim that in reality, Chevalier never hired artists and "instead used the consumers’ funds for miscellaneous personal equipment, rent for a personal residence, and licenses for a separate project."

The settlement order imposes a $111,793.71 judgment, but it's suspended due to Chevalier's inability to pay. "The full amount will become due immediately if he is found to have misrepresented his financial condition," the FTC writes in today's statement on the case.

Can you get blood from a stone? Money from one that can't manage his own money, let alone that of others?

There are well deserving Kickstarters, but one needs to do their due diligence before backing the next shiney. That  shine may just be obscuring a pile of shit and empty promises.

Hat tip to +Vincent Florio
Posted by Tenkar at 3:09 PM