Second Session of Far Away Land in the Bag - Scything & Dicing 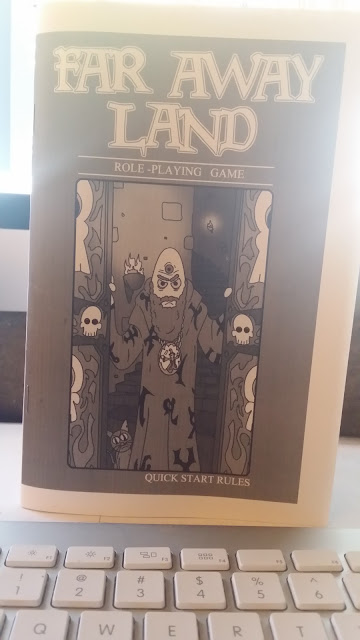 Last night was the second session of the Temple of Zoko, my Saturday Night group's introduction to Far Away Land and a testing of the system / gameplay prior to me running a session or two at NTRPG Con later this week.

My four player group survived without a casualty. That was due to smart play on the part of my players.

As far as I know (as I didn't see them in the FAL Quickstart and I didn't have time to refer back to The Tome of Awesome) there are no disarm / weapon grabbing rules for FAL. Well, one of my players, whose character was skilled in unarmed combat, decided he want to take away the BBEG's apparently magic scythe. The two wrestled over the scythe for two rounds, and the player's character gained control on the second round, which changed the dynamics of that final encounter. I'll post my house rule later.

Far Away Land is a big hit in my group, a grumpy set of grognards one and all. It's nothing like D&D and yet plays out very much like D&D. It also seems to encourage me to "ham it up" just a bit, which has gotten my wife laughing from the next room and entertained my players to no end.

We've pretty much agreed FAL is going to be the game we play to take breaks from ongoing campaigns, as the change of pace should keep everything fresh.

All I need to do is print up a dozen or so Far Away Land Quickstarts for NTRPG Con.

Now I'm going to sneak in yet another giveaway, also open until June 8th. On June 9th I'll pick a winner and mail them the self printed copy of the Far Away Land Quickstart that I used for the last 2 sessions (the very one pictured above). And yes, I'll mail it anywhere in the world on the following weekend.

All you need to do to enter is comment on this post :)
Posted by Tenkar at 8:47 PM