NTRPG Con Day One - And Much Shopping Was Done, and Gifting Too 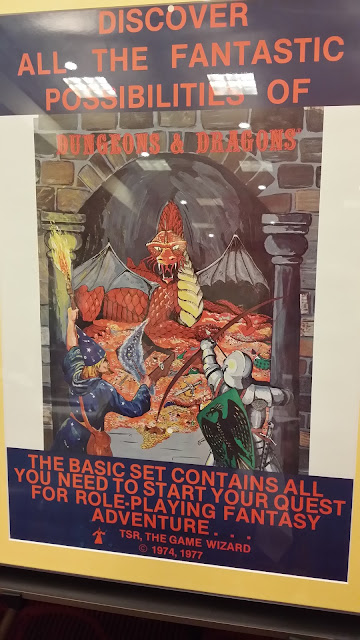 Rach and I don't have a game to play in until 6 PM tonight - +James Aulds Labyrinth Lord session. So we did what any rational adult with way too much money in their pocket would do - went shopping ;)

Rach bought another plaster jewelry box from Diesel (I'm already looking forward to Rach getting stopped by the TSA like last year when she made a similar purchase from Diesel.) I bought more prints and an original piece of art from +Doug Kovacs (if you are at NTRPG Con and haven't checked out Doug's table and at the very least, picked up some prints you are a bloody fool.) Then I raided +Michael Badolato 's tables for some Judges Guild stuff.

+Michael Badolato gifted Rach with a Mythus Tower shirt. Yes, I am jealous. Rach also got a gnomish mug from +Zach Glazar last night. Zach gave me a spongey die. Damn lady has all the luck.

Actually, I did get gifted a mini and a Lesser Gnome button by Edwin Nagy. He was the gnome whose name escaped me last night ;)

Oh, and +Richard LeBlanc of New Big Dragon Games gave me some stuff to give away. One piece will go in the NTRGP Con Swag Bag Giveaway and the other two will find a post either later today or tomorrow where you folks can try and get lucky :)

I've got lots of pics to take of the art and such for a later post.