Gygax Magazine #4 is Here - in PDF at Least 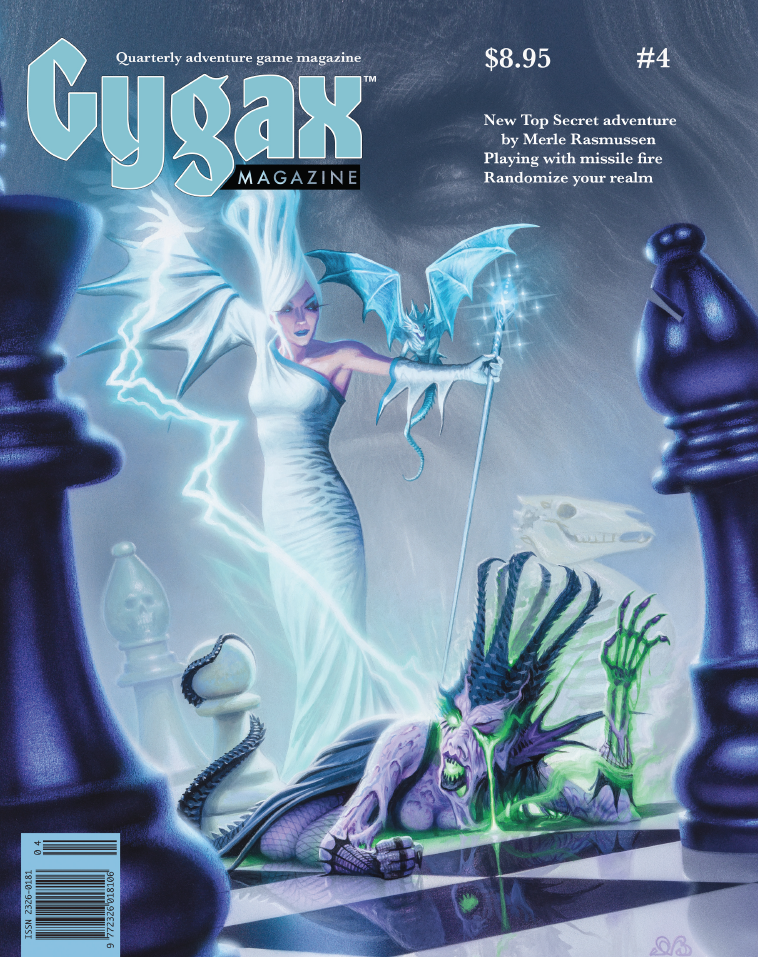 I haven't done more than a quick scan of the PDF, so all I can do is bring up some observations that come to mind.

The cover literally screams Dragon Magazine from the rooftop of the hobby in the loudest of all possible voices. Which usually leads to disappointment when one reads the table of contents, and is reminded that Gygax Magazine isn't the old school magazine whose trade dress it apes, from cover to font to presentation.

All of which leads me to a mild surprise with Issue #4 - there is a decent amount within that is applicable to "old school" D&D. It does seem, however, the system used for reference varies with each article (AD&D, S&W, RuneQuest, Top Secret, AD&D 2e(?) 13th Age). The various Classic / OSR systems used are not labeled but are obviously not the same system in each article. I'm assuming this is to avoid saying "Dungeon & Dragons", but it's awkward. There are enough clones to use as reference, and the Necromancer's Cookbook is obviously using the S&W format with both ascending and descending AC. Just say such.

Which leads me to yet another observation - the OSR's lack of an "in print" magazine is noticeable, and Gygax Magazine is an inconsistent filler of the gap. We do have a wealth of 'zines, but the lack of a true magazine in our corner of the hobby (Fight On! and KnockSpell seem like faded dreams at this point) is noticeable. It's a shame, because one of the things the OSR does not lack in is creativity (as evidenced by the 'zine and the abundance of small press publishers).

Men and monsters of Polynesia by Michael O. Varhola

Adventuring without the magic by Jon Peterson

The Necromancer's Cookbook by Dave Olson

Randomize your realm by Timothy Connolly

Psionics without the points by Bill McDonald

Order of the Stick by Rich Burlew