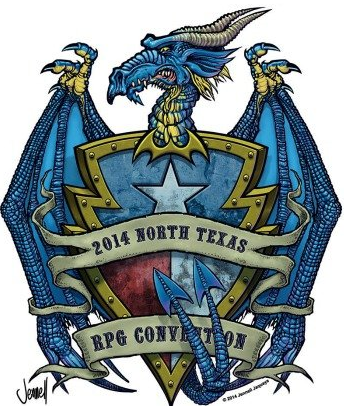 Last week I found myself at my first gaming convention in over 20 years. I had so much planned that I did not do, did so much that was not planned, and have some ideas on how to plan for next year's convention. So, without further waste of space, the things I learned at NTRPG Con.

1 - No schedule survives arriving at the con - whether games get cancelled, you close the bar down at the hotel, conversation and beer prevent you from running your planned pick up games or unplanned pick up games rob you of that optional thing called sleep - just roll with it. You would think that 16 hours a day of potential gaming and con going is a long stretch of time - it isn't.

3 - Pick up games are hard to schedule. I planned on running some Drinking Quest. Brought all three decks. Did lots of drinking and some pick up gaming (Including Red Dragon Inn thanks to +Doug Kovacs - Rachel just made me order a copy tonight) but not the pick up gaming I had expected. Still worked out fine.

5 - Leave time just to enjoy the ambiance of the con. Yes, it has a certain ambiance.

6 - Socializing is more important than gaming, but if you can do both at the same time, it's a win-win. I cemented more friendships than I ever thought was possible, and that was more valuable than any of the gaming (although some of the sessions were gaming and friendship cementing)

7 - Pack light, because you will be leaving with more than you came with. Without trying, I left with 2 large game boxes and probably 10 or so adventures and game booklets. I still don't know how it all fit in my carryon to go home.

9 - My wife Rachel is apparently a natural roleplayer. She has an easy grasp of the concept as a whole, if not the mechanics involved.

10 - I really need to organize a Tavern get together at the hotel bar next year. Set a time and day and place within and then buy my friends and my readers their first round. Rach says I need to limit the number to the first 2 dozen or so, because if word spreads, I may be buying more than my wallet can handle ;)

11 - make sure you know WHICH hotel you are staying at. North, South, it's all the same shit until it isn't ;)