Downloads of Swords & Wizardry Complete and the Power of Reddit 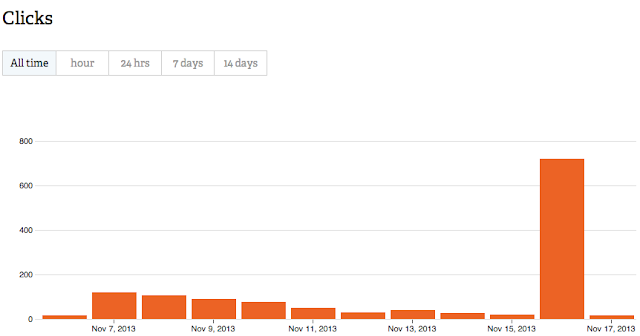 The above graph shows the downloads of Swords & Wizardry Complete via DropBox using a "bitly" link for tracking (initially shares of the file were either via email or untracked from the DropBox file direct). See that huge spike yesterday? That was nearly all Reddit - like 98% or so. Well, it was till they nuked the posting. I rarely post anything to Reddit, and my last few from last year were my own blog posts, so this got nuked as spam for not sharing enough variety. Fair enough. Makes sense actually.

Still, the power of Reddit is amazing, or at least has the potential to be so.  As such, I have the following goal:

I'll be sharing at least one blog post a day from the many blogs I follow on Reddit. Today's shared blog post is +matt jackson 's DIY Wooden Runes post. This shit is awesome, and should be shared far and wide in any case.

Some more eyes (and hopefully boots on the ground) reading OSR blogs can only be a good thing. More OSR is more goodness ;)
Posted by Tenkar at 10:33 AM