In This Corner, Weighing in at Six Hexes - Tenkar's Landing and the Surrounding Landsi 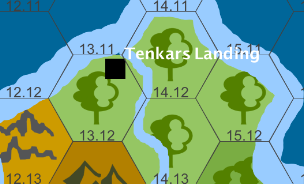 Tenkar's Landing is where the new campaign will kick off. A den if villainy and thieves - it is run by merchants after all ;)

I'll map out the town later.

To kick the campaign off, I want them to get their blades wet so to speak. I'm thinking of setting Sailors of the Starless Sea on the north edge of the mountains in hex 1313 and dropping some adventure leads in their laps at the beginning of the session. The DCC Adventures have a nice Swords & Sorcery feel in general.

Maybe leave them some hints of the activity going on in the ruins to the south west of the mountains and the tomb to the south east. Oh and something on the other side of the river - maybe hex 1512.

I need to tweak up some S&S flavored encounter tables ;)