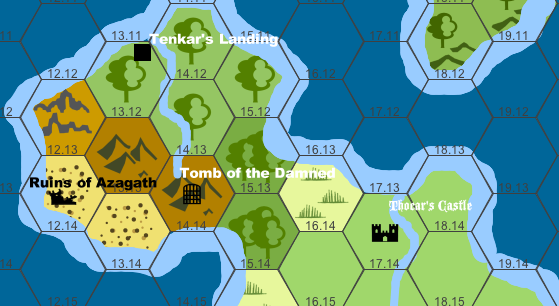 This would be, for all intents and purposes, the initial "sandbox" for the players in my Crypts & Things Campaign.

I'm still trying to put everything together, and locations and and names are subject to change.

So, for the brief outline:

Tenkar's Landing will be the starting point. A large merchant town that does much trade by sea. Nominally under control of the current occupant sitting on the throne at Thocar's Castle. So long as Tenkar's Landing pays it's taxes, the merchant are left to run the town as they will.

Ruins of Azagath - this might become a "mini sandbox", as I see this as a remains of a mad sorcerer's tower. The explosion was large enough to partially destroy the mountain in hex 1213 and laid ruin to hexes 1214 and 1314. There are rumors of treasure and possibly magic still left in the ruins. The creatures that roam hexes 1214 and 1314 are believed to be cursed.

Tomb of the Damned - place holder for a newbie adventure - either the one in the C&T book or the Halls of Nizar-Thun or one of my own creation (or a DCC RPG adventure conversion).