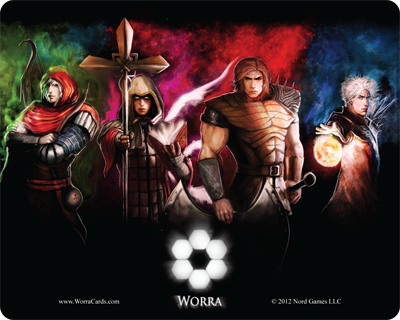 Worra Realms - Fantasy RPG is a D20 based RPG that uses cards instead of books and maps. I'm going to guess it uses the OGL, as it claims it is compatible with other D20 types games out there.

I actually watched the video straight through, and it's pretty interesting. The decks of cards basically substitute for you rulebooks, character generation, adventure mapping, monsters, treasure - it's actually pretty neat.

The base game is $45 - but that doesn't include the character decks. Which means you'd have to grab a ser of D20 rules. I'm not sure how compatible it would be with the OSR rules I gravitate towards, but it can't too far off.

The base game with the character decks is $75, which isn't all that bad when you consider a Player's Handbook and a DMG will set you back more that that.

The dungeon is determined but pulling cards, which makes this game more random than most. That being said, it may be an awesome way to introduce family and friends to the concepts of RPGs in a semi-stealth manner ;)

I do nearly all my gaming on G+ these days, and the deck play wouldn't convert well to a video hangout. Otherwise  I think it might make for a nice diversion from a weekly campaign, as I suspect it results in a more "beer and pretzels" styled game experience.

From the Kickstarter Blurb:

Worra Realms is a revolutionary 2-6 player tabletop RPG that does away with character sheets and huge guide books. Players set off on exciting quests, delving into forests, caves and dungeons in search of danger, treasure and glory.

Game sessions can be setup in only a few minutes and last from 1-3 hours on average. Worra can be played with or without minis and is as simple or as complicated as you want it to be. It's a perfect game for new players and seasoned GM's alike.

The Standard Set contains 200 cards designed to aid a creative game master in creating and running a fun and exciting campaign. The Elite Set adds to the fun with 300 additional cards for creating characters.