Does Size Matter? How Large a Party Can You Handle? 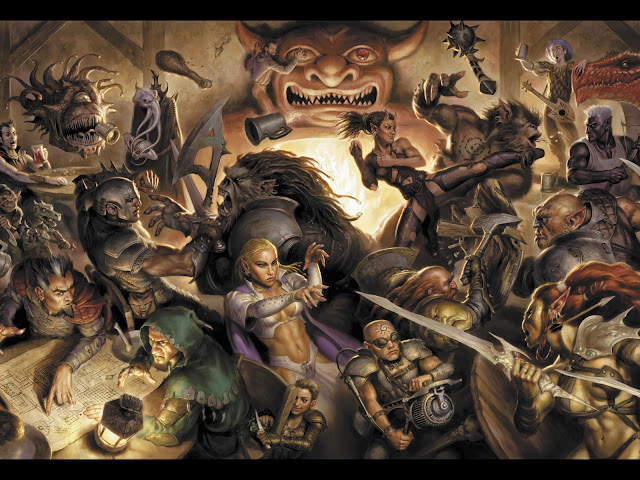 I know I've written a bit about this in the past, but I'm thinking there's a point where larger party =/ more competent party. I'm including NPCs in this to.

I know back in the Golden Days of gaming, parties with 10+ players plus henchmen and hirelings were not unheard of. My personal first experience with that was being invited to a game that had about 18 players and 2 DMs. The regulars in the group each brought 2 or 3 henchmen with them which put the party numbers well north of 50 trudging through some dungeon. It was also my first experience with a party caller (and 2 DMs at once). I couldn't tell you what the session was about as I was totally confused and lost. I don't even recall if I ever rolled dice that night.

Now, in my current AD&D / OSRIC game we have six steady players, which means six PCs at most. Well, except that I have some open invites out there and have had guest players when we were below our regular numbers. I fully expect to run a session with 7 or 8 players at some point ver G+ Hangouts.

If we added NPCs to the mix, even just one per PC, we'd have a dozen or so characters to worry about during the session. I work without combat maps, but if we go much beyond 6+, I'd probably have to whip them out, just to have an idea about character placement. As you can guess, I'm loath to do this.

I suspect that the largest total party size I could run is 8 before play would suffer. Maybe more if it's less players and more henchmen, but it's still a shitload of moving parts to keep track of. All that and the added downtime for the players that are not engaged in the action at that very moment - the more moving parts, the longer the gap between each character's actions.

Besides, how can a large party effective traverse a dungeon? The sheer numbers get in the way at some point. Wilderness travel I can see how large numbers would be effective in keeping away the troublesome riff raff, but that doesn't translate well to a dungeon environment.

How large a party are you willing to handle as a GM? AS a player, at what group size does the enjoyment of the game start to decrease for you?