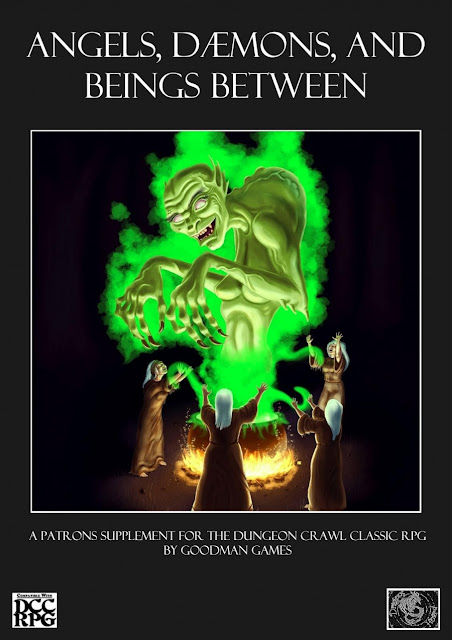 If you've read this blog over the last six months or so, I'm sure you've noticed that I'm a big fan of the Dungeon Crawl Classics RPG. There's certainly not enough time left over after work and other responsibilities to play all the RPGs I want to, but I will get back to occasion DCC GM'ing again. It's simply a fun system.

Angels, Daemons, and Beings Between is a Patrons Supplement for the DCC RPG. So what, exactly, are patrons?

Simply put, patrons give the PCs a little extra "oomph!" for the cost of a price to be paid later. That could be in 5 minutes or 5 years. I like to think of them as the Lords of Law and Chaos from the Eternal Champions Series of books by Moorcock.

AD&BW gives you 13 unique patrons (one of which is actually "4 Maidens" but it works). They follow the same formats as the DCC RPG Corebook samples - description, Invoke Patron check results, Patron Taint (always makes me want to giggle like a dumb junior high student at a dirty word ;)  Patron Spells, and Spellburn.

Each patron is well written. Scratch that, enjoyably written, to the point that I'd like the opportunity to use each one. I'll never find the time to use all of them, but the thought is there ;)

Daniel Bishop and Paul Wolfe are the writers. I've followed Daniel's work on other DCC RPG products as well as his excellent blog. Paul Wolfe's work is new to me, but if this is the type of work he does, I look forward to more.

The artists are David Fisher, Scott Ackerman and Daniel Bishop.

David's work first graced this blog with the Santa Claws Patron that he drew specifically for the Christmas DCC Contest. Well done!

Scott's work graces every page of this blog, as Scott generous donated the blog header you see. Simply an amazing artist.

I had no idea Daniel was also an artist. I'll have to shake him down for something on the blog. No idea what though ;)

Sean Connors as the lead brought an excellent team together and it shows throughout the book. About the best compliment I can give is that the book feels as if there was just one man behind the words and the art - it's a team that hit all of it's points.

I'm only halfway though it so far - six out of thirteen patrons down. Thankfully  it's on my iPad so I can read it in bed before sleep. Actually, with these patrons, exposing them to my dreams may not be the best idea ;)


Patrons, more than just mere supernatural benefactors, are schemers whose plots set the world in motion. They are beings who amuse, enthrall, and terrify the mortals who dare to bargain with them.

You, dear reader, will find thirteen fully developed patrons to use for the Dungeon Crawl Classics RPG.

This product includes 40 new spells, monstrous minions, and new spell burn and Patron taint tables to use in your DCC games.