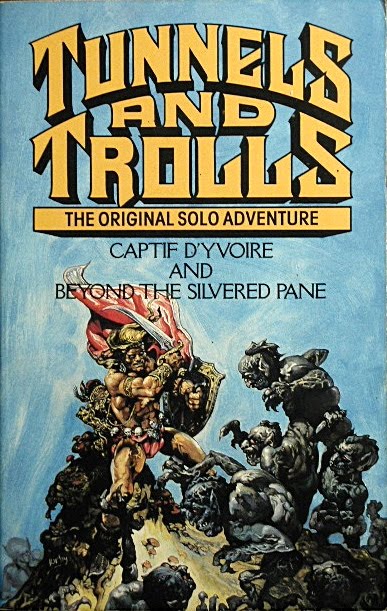 If you haven't noticed, I've recently gotten into a "Tunnels & Trolls Monster Creation Kick" on this blog over the past week or so. Sure, you can blame it on the Deluxe Tunnels & Trolls Kickstarter that recently "kicked off" (and is doing amazingly well), but that's only part of the reason. In truth, I do it because it's fun and because monsters are pretty sparse in 5 / 5.5e T&T (which just happens to be the baseline T&T that I tend to gravitate to).

How sparse? The sample short list of monsters takes up one page in the Corgi Edition of the T&T 5e rules. That's sparse. It's also simple, as the one number, MR or Monster Rating tells you all you need to know - hits to kill, combat dice and combat adds. Everything but flavor.

T&T 5.5e adds in Spite Damage. Spite Damage is cause with every natural 6 rolled, and it ignores armor and can even be suffered by the side that wins the combat. With T&T 7 / 7.5e, Spite Damage can also be used to indicate when Special Damage is caused, such as a spell effect, or extra damage beyond the simple Spite Damage. Special damage allows for each creature to have a unique power and ability. It also keeps the party on their toes.

I've also taken to giving my daily monster creations a short paragraph description. Over the last few days, I've taken to writing that description from the point of view of the monster itself. In most cases, I think this is more effective, especially when it comes to the GM using it in gameplay.

Like what you see? Stay with me forever. Forever less a day. I don't bite - much. There is nothing to fear. Your soul will join the others in endless service. What could be better than an eternity with me? Ignore the shrieks you hear in your head. They are nothing but memories and regrets...

And here's the Mind Melter from earlier this week:

The tentacle mouthed Mind Melter. They have a different name for themselves, and the unwary Delver may hear the name in his mind when encountering one, but he'll never be able to pronounce it. Highly intelligent, Mind Melters have been known to communicate with Delvers via mental images, requesting certain items in return for safe passage - sticks, gold, a perfect diamond, a lump of coal and more have been asked for. Those that pay may pass. Those that don't may not, or they may try and possibly die.

They are Delvers. What actions do you expect them to take?

Personally, I think the first example is a little stronger (not to mention shorter).

In any case, I'm interested in seeing where Ken takes monster creation / description / listing / etc in dT&T. Because without the monsters, the tunnels are kinda empty...

(more than willing to give my conversion to the cause Ken. Can't speak for the artists tho ;)