Thinking of Using DCC #27, Revenge of the Rat King to Kick Off the AD&D 1e Campaign 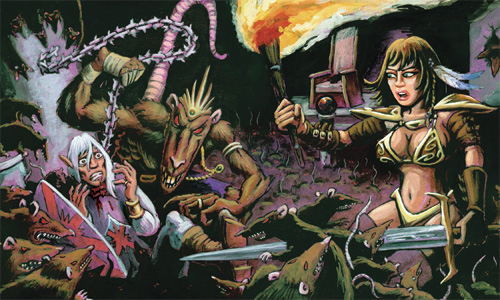 I know, kicking off a AD&D / OSRIC campaign with a module for PCs level 4-6, when my players will average 3-4 (I'm giving them 8k expo, so level depends on class(es) chosen), has the potential of killing the campaign before it even starts. Still, my players are tough and experienced at not only thinking outside of the box, but also standing on top of the box and thinking when it suits them.

Besides, it uses one of those scenes I generally hate in the middle of a campaign: "The party is captured and stripped of their belongings", but works amazingly well to start a campaign: "You awaken with other strangers. Last you remember you were drinking in a tavern, now you are in a damp cell with nothing but the shirt on your back and some soiled leggings. What do you do?".

Did I mention it has a Rat King? Not a single copper in the whole adventure as far as I can tell. I'll need to rectify that.
Posted by Tenkar at 7:52 PM