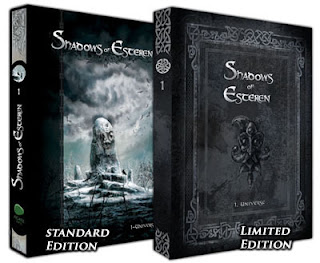 I'm on a Kickstarter kick. I'll freely admit that.

Why is it? Because much of the coolest stuff going on in our hobby is happening on Kickstarter (and Indiegogo to a lesser extent).

Case in point: Shadows of Esteren - a medieval roleplaying game with horrific and gothic influence. Holy shit but if it actually hits those sweet points this game could be a killer!

Actually, it probably hits those sweet points, as this is the second Kickstarter for the game (the first wrapped up in the end of July, and I was way too invested back then in way too many Kickstarters). The first Kickstarter raised over $55k against a goal of $3k. This one? $35k against $3k with 21 days to go.

Yep, it's funded and will fund more before it warps, probably more than the first round.

My issue with the Kickstarter is not the product, but the needlessly confusing Pledge Levels.

I'm sure it looked really good in the concept phase, but when you drop a dozen or so of these on the page...

Still, it looks like a cool game. You can actually get the PDF of Book 0 at the Studio2 website for $5 before committing to the Kickstarter.
Posted by Tenkar at 5:50 PM