An Interesting (and mostly written) Kickstarter - Maelorum, an Epic Gamebook 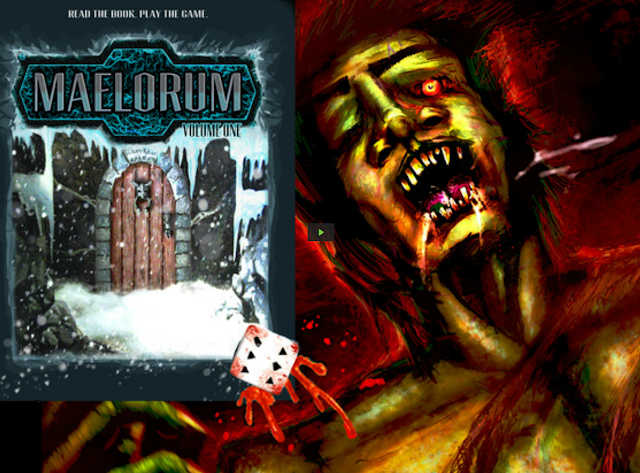 I never did play the Fighting Fantasy books much. I knew of them, but they never really crossed my path. TSR Endless Quest Books? God yes, and I'm embarrassed to admit to that ;)

I did have a MERP solo book that was put out by ICE, that had a pretty tight story and a character with HP and dice that had to be rolled and all that. Played that sucker to death. Also played some Tunnels & Trolls solos back in the day.

Where am I going with all of this?

I'm willing to bet that Maelorum is well written. Actually, lets take that back a step and remark on the fact that we have a gaming Kickstarter that is seeking funding not for some unwritten project, but for a written project with some amazing artwork that needs the final tweaks - editing, playtesting, formatting.

See, this is where a project should be when it seeks crowd sourced funding. Not in the "here's my notes on index cards" stage, nor the "hey, I got this fucking cool idea! Why don't you give me money so I can write it" style of putting together a project, but the "I've spent 10 years working on this, it's written, the art is done and I just need funding for the final push" type of project.

Maelorum is a rarity among Kickstarters, not just because the grunt work is already done, but it's looking to take "gamebook" style roleplaying to a new level. I like that. It hits my nostalgia tickle point.

There's another thing I need to mention - the POV dungeon art is on the money, at least the samples shown. They could be wrapped up as visual aids for dungeon adventures, kinda like a Tomb of Horrors or Barrowmaze illustration book. They look that good to me.

Alright, I'll be supporting this one, as much for the story as the art.

It looks damn good. It may have even followed my suggestions from my previous post - such as have the writing and art done or nearly so ;)
Posted by Tenkar at 8:14 PM