More Thoughts on Racial Specific Character Classes - How Many Does a Race Need? 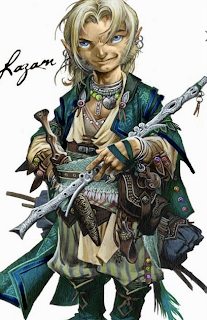 Assuming you are going to go the ACKS route of introducing Racial Specific Character Classes to your OSR game of choice, how many do you need?

What I mean is this - humans cover all four compass points in pretty much every ruleset (with the exception of S&W White Box, which lacks a thief class, just like the the original D&D Boxed Set). A human centric party has access to a fighter, cleric, magic-user and thief class. You can leave out demi-humans and not have a hole in your party.

Most OSR games have PC clerics as human only (apparently demi-humans dont actively worship their own gods - or maybe carpet bagger human clerics come along to fill the niche?). Elves are usually the only option for a non-human arcane spell caster. Sure, they can all be fighters to a limited extent, but the only class offering unlimited advancement to the non-humans is thief.

Think about that for a moment. Thievery is the niche that was given to demi-humans to thrive in. Apparently it's the only thing they are good at, and they all make better thieves than humans if your game uses racial adjustments.

I know, the demi-races are balanced by their level limits, but what about the limited options? Isn't part of the fun of playing a game about imaginary fantasy to be able to be and do fantastic things?

3e almost got it right by opening up all classes to all races, but even that fails to capture the uniqueness of each race. A Dwarven Warrior and a Halfling Warrior draw upon different backgrounds, and especially in the case of the halfling, I'm pretty sure the human centric "Fighter" class is a poor fit.

Yes, this stuff is kicking around in my head and on my hard drive to some extent. We'll see if it bears fruit.

So, does each race need to cover all 4 corners to some extent? If you want an "All Halfling" campaign, or "All Elf" campaign, the answer is probably yes. Doesn't mean each race would be equally good at each of the four "class type niches", but they probably all should be covered.

This, of course, would lead to an insanely huge rulebook ;)