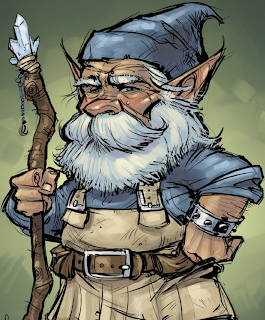 I'm sure pretty much everyone remembers the "No Gnomes!" videos and other similar advertisements that WotC used when it was rolling 4e out the door. Somehow "No Gnomes!" was supposed to be a selling point.

How did the little buggers get such a bad rap?

In AD&D, the were the only non-elf (or non-half-elf) race to get access to arcane magic, although they did it as illusionists.

In the realm of OSR retroclones, halflings might get slighted, but they aren't overlooked like gnomes are:

LotFP Weird Fantasy - Just be happy halflings made the cut and don't ask about the gnomes. They're probably being corrupted as I write this.

ACKS - Halflings were omitted on purpose. Gnomes weren't even thought about enough to be purposefully mitted - the were just left out.

Is it just because they were one of the last races (certainly the last race that wasn't a hal breed) that was added to the adventuring mix that they suffer this oversight? Is it because they are some ill defined quasi cousins of dwarves? Is it the curse of the Garden Gnomes that keep them down? Did the Tinker Gnomes of Krynn use up the last of the goodwill that was aimed in the Gnome's direction?
Posted by Tenkar at 10:12 AM