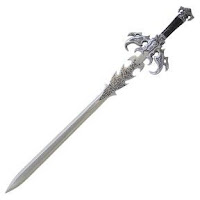 I was going to label this for use with Swords & Wizardry, as it certainly has gained some fame over the last few days, but Talizmar's Woundlicker should work in any OSR/OGL game with little changes necessary. So use it in ACKS, DCC RPG, Blood & Treasure - it should work in all.

Talizmar's Woundlicker is a magic longsword with some known history. It's first owner of any sort of fame was Talizmar, a warrior that fancied himself a ranger of sorts. He found the sword in an ancient barrow, and quickly fell fond of it. Maybe it was the etchings on the blade that seemed to slowly flow when stared at, or maybe it was the minor yet consistant healing of his wounds in combat that caused the bond, but he was never without out it. He kept it until the day he was felled by Tal & Mal, the two-headed giant, who left the sword where it fell with it's owner.

The game effects of Talizmar's Woundlicker are as follows. It is long sword of excellent quality, and as such, it inflicts +1 damage on all damage rolls. The blade is enchanted, with the following effects. When first used in combat, it instills a -2 adjustment to the wielder's to-hit roll, as the blade is groggy and desires blood. After the first hit, the adjustment becomes -1 to hit, after the second successful hit in the same combat it has no adjustment, upon the third successful hit it is +1 to hit and so on until the 5th successful hit, where it becomes +2 to hit until the end of the combat (and combat within 1 turn / 10 minutes picks up where the blade's bonus last was at).

Additionally, each successful hit on a living opponent heals one point of HP damage of the wielder (2 points when maximum damage is rolled). These points can heal past the normal maximum HPs (phantom HPs) of the wielder. Any phantom HPs fade one turn after combat has ended.

When the blade heals the wielder, an observer will notice blood drawn by the blade flows down the blade, over the hilt and seemingly into the wielder's hand.
Posted by Tenkar at 1:17 PM