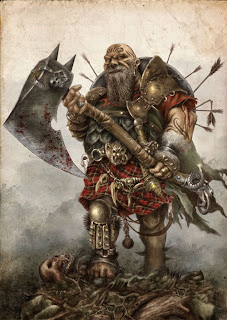 Hey, like I said, I do requests.  This one was a specific request, so lets dig right in.

Not too long ago, I wrote an article called We Want What We Want. In it, I talked about how in all games, what the player wants is more important than what the game's designer wants to give him (I hope we aren't confusing "needs" and "wants".  Just because I want something, doesn't mean I should get it, or that is fills a need). A game designer can create the best game in the world, with the most elegant mechanics, but if it isn't what player wants to play, it's little more than an interesting curiosity. (yep, lots of Heartbreakers out there in the wilds)

One of the best things about tabletop rpgs is the ability for a GM and the players to change the way the game is played, tailoring it to their needs (Houserules for the win.  Shit, I aint even a tad grumpy yet). I started mucking around with the rules for D&D at a very early age myself, changing bits that I didn't like, grafting on parts of other games, and wholesale rewriting portions. (Not surprisingly, this quickly led to my writing of entirely new games on my own, but that's another story.) I think that's integral to the hobby. (I'd have to agree)
Which means, ultimately, that a good game's design starts with an examination of what players want (which is no easy task, as you can ask any 10 players and get 10 different lists of "wants".  you have to give them what they "need", although that is sometimes even harder to figure out). When I started designing games professionally 25 years ago, that information was difficult to get. Now, it's much easier. (I hesitate to say that it's easy, but the challenges of doing so are probably best left to another post as well). Designers come up with interesting ideas for mechanics all the time, but if they don't address the needs of the players, what's the point?

Designers do players a huge favor by giving them a game that comes out of a knowledge of what the players want. (hey, I may want to play "uber powered" pcs right from the start, but is it what I really need?  will it lead to sustained gameplay?) But there's more. Knowing that players are going to tinker anyway, why not provide them with a game that is easily customizable (aha!  D&D Next - The Chinese Restaurant Menu Game - I'll take one from column A and number six from column B.  Can I get that with brown rice, and a soup instead of the egg roll?)? If the designer learns that some gamers like a game that does something one way, and others like it a different way, why not give them a game that can do both? (are the different ways compatible?  balanced?  is there a reason the ways are different in the first place?) The thing about roleplaying games is that whatever way you want to play is the right way (fair enough). As soon as an rpg game designer says, "this is the way to play this game," or even, "this is the best way to play this game," my advice would be to run and hide. (i'm not so sure about that)
Listening to players is key. Playtesting and truly using the feedback provided ensures that gamers get the game they want (again I question the use of the word "want" as opposed to "need"), and not just something that designers want to give them. That doesn't mean, however, that players design the game. (thank God, because releasing a 20% completed game into the wilds for "feedback" sure seems like someone wants the players to design the damn game)That's the part where the designer really has to be a good listener. There's an interesting story about the game designers who designed the computer/console game Borderlands. Playtester feedback for the game was used extensively (which shows--it's a great game). But sometimes the playtesters gave bad feedback (what?  NEVER!). Or at least, feedback that called for changes that would have been bad for the game. For example, playtesters said that when a character's gun needed to be reloaded that it needed to go a lot faster. The game's designers knew that the reload was already really fast. Speeding it up would not only hurt realism, but gameplay as well. But they didn't dismiss the issue. Instead, they looked at the reason for why the testers said what the did. Reloading wasn't actually too slow. It was just too boring. So rather than speed it up, the designers added a lot more to the animation of the action. They made it look and feel (and sound) more interesting. Subsequent playtests showed that players loved it, and the complaints on reloading went away.  (Interesting.  The players got what the "needed" and not what they "wanted".  Monte knows, and he left the design team.  It says a lot about Monte, and it probably says a lot about why he left)

The point is, the designers didn't just allow playtesters to design the game for them, but they still listened and learned from them. The playtesters called for a change that wasn't a good idea, but in so doing they still pointed out a problem. And the designers listened. The game players got what they wanted.  (No Monte, they got what they needed.  Sigh, you were so close ;)
EDIT: This post is one of many I'll be posting about my game design philosophy (a sort of informal "series" I started many weeks ago) and is not meant to be an indictment on anyone else's approach, philosophy, or plans. It's also not a secret revelation of any kind of behind the scenes drama or whatever. (For those looking for such, there is none to find, I'm afraid.) It's just my own thoughts.
Posted by Tenkar at 8:02 PM